Back in 1990 Pres. Bush signed a bill declaring schools to be gun free zones.From the look of this chart from the gun rights examiner, the bill was addressing a non-problem and wound up creating one: 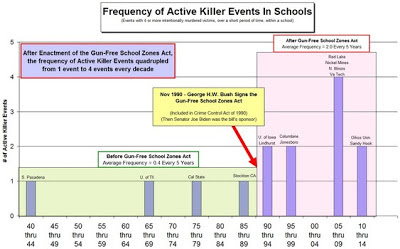 Up until the bill became law, we had one such shooting every 12.5 years. Since then we've had one every 2 years, which looks to me like a six-fold increase. A proper engineering approach to this would be to declare the bill a failure, apologize to the surviving relatives of the post 1990 shootings, and repeal the thing.

The politician's approach would be to increase the penalties for shooting kids in a school by adding another 5 years to the jail time.

Meantime a Russian is warning us about gun rights based on his countries experience with them.


These days, there are few few things to admire about the socialist, bankrupt and culturally degenerating USA, but at least so far, one thing remains: the right to bear arms and use deadly force to defend one's self and possessions.

Stanislav's commentary is well worth the read.
Posted by Billll at 8:06 PM

Thanks for the link.