Here we are again, outstripped only by the panics of the previous 2 years, but up a bit anyway, probably in step with population increases. 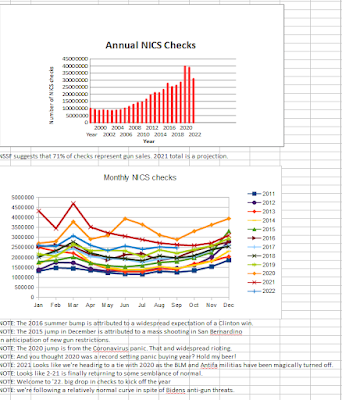 The dems keep yammering about confiscating "assault weapons" defined to be anything that shoots, and the SCOTUS keeps smacking them down. Soros funded AGs are still refusing to seriously prosecute crime, but they are being recalled and defeated everywhere. Promising, that. So far the people haven't decided to quit calling the cops, and just call a discreet cleaning service instead, but that's still a possibility.

Posted by Billll at 5:57 PM No comments:

OK so if you're looking for humor, reading amicus briefs to supreme court cases is probably not the most fertile ground. OTOH when one of the participants is the Onion, a competitor for the title of "Newspaper Of Record", in which it is defending its use of parody, well, you might strike gold.

In addition to maintaining a towering standard of excellence to which the rest of the industry aspires, The Onion supports more than 350,000 full- and parttime journalism jobs in its numerous news bureaus and manual labor camps stationed around the world, and members of its editorial board have served with distinction in an advisory capacity for such nations as China, Syria, Somalia, and the former Soviet Union. On top of its journalistic pursuits, The Onion also owns and operates the majority of the world’s transoceanicshipping lanes, stands on the nation’s leading edge on matters of deforestation and strip mining, and proudly conducts tests on millions of animals daily.

The Onion is arguing that any reasonable person would be able to figure out that things the Onion published regarding a local police departments approach to pedophilia were humorous parody and not some kind of defamatory muck raking. As the case progresses we may het to see if a liberals complete lack of a sense of humor, a known trait of the breed, must be accommodated by humor writers, lest they feel "targeted" or "triggered". This would necessarily make humor a lot less funny, but the eventual complete ban on humor is an unstated plank in the liberal platform.

Posted by Billll at 6:58 AM No comments:

Same as it ever was I guess with anything having to do with Trump being quickly leaked to a hostile press. Since the letters in question were taken by the FBI and held in no one elses possession, there can be no doubt whatsoever who is doing the leaking. Not only is the FBI Bidens personal gestapo, I guess they will soon be joined by those 88,000 new Stasi IRS agents.

Posted by Billll at 6:18 AM No comments: