SOS Griswold is assuming the mantle of papal infallibility, and is spreading it over every clerk and recorder in the state.

She categorically forbids any audit of any sort of the electoral process, and declares that if any voting machines actually get looked at, they become "unclean" for any future use.

If the process were half as clean as she claims, an occasional audit would only confirm it and give everyone a warm, fuzzy feeling. Forbidding any audit of any kind is kind of a large red flashing sign that there's something she wants to keep hidden.

Posted by Billll at 9:08 PM No comments:

(X)DE is an abbreviation for (something) dependency enhancement and describes a situation when the attack on a problem succeeds in only making it worse. Dealing with a problem in such a way as to make it worse is an old concept. It includes making antibiotics available to treat some disease, STDs for example, at a high enough price that do it yourself treatment usually doesn't completely finish it, but leaves the more resistant bacteria behind. Saw lots of this in Viet Nam. The other example is fighting a war in incremental stages, and giving the enemy time to adapt to your methods. Again, LBJ did this in Viet Nam, dragging the war out interminably. Everyone did this in Afghanistan trying to avoid being called a bully by the non-participants. The Chinese are next up. I don't think they'll make that mistake.

This fellow was photographed at the capitol on Jan 6. He was arrested at his home on Jan 8, and has been in jail for 6 months with no charges filed.

The judge let him out if he promised to have no contact with any electronic communications, but he was caught watching Mike Lindell on his phone.

According to court documents that were filed on Thursday, Jensen had been found by officers menacingly “streaming news” to a “wi-fi” connected device in his garage all by himself.

If the North Koreans catch you listening to South Korean radio, you go directly to prison, but they at least allow you to take your whole immediate family with you.

Posted by Billll at 7:25 PM No comments:

Great soon-to-be unreported story in the making. As the Taliban now go door-to-door looking for specific enemies, they are also confiscating personally owned weapons, stating that with the defeat of America, the Afghani people are now safe and no longer need personal weapons.

Taliban jihadists reportedly began seizing personal weapons from Afghans in Kabul on Sunday, claiming civilians “can now feel safe” and no longer need the firearms because the terrorists had taken over the country.

Expect jubilant stories in the American press celebrating the peace and freedom being enjoyed by the Afghan people now that they no longer have a need to own personal weapons.

Posted by Billll at 6:29 AM No comments:

Washington Falls To Americans As Biden, Harris, and Staff Flee To Delaware 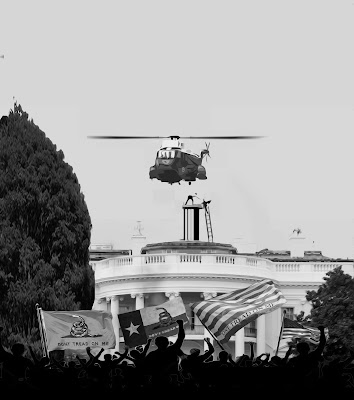 Well, one can hope.

Pic found at Day by Day.

Posted by Billll at 8:04 AM No comments:

Here's a piece from Epoch Times, behind their paywall, that describes the confiscation of large quantities of fake vaccination certificates. From China, no less, who supplied some number of pre-filled out ballots in the last election.

You'd almost think they wanted infected persons to distribute themselves as widely as possible in an effort to get the U.S. economy to shut itself down.

Failing that, they could support the electric car movement, since they supply most of the batteries, and oppose the Gen 4 nuclear power effort, which they are rapidly developing. Nothing like watching the Americans blow out their power grid trying to recharge 100M golf carts every night when the solar panels, which they sold us, aren't working.

And I'm thinking: "Wouldn't it be nice if we had a source for oil from some place that didn't want us all dead? Say domestic production?"

Sooner or later, we all die. Data from Massachusetts suggests that later is still a good estimate.

More than 4.3 million Massachusetts residents out of the state’s population of about 6.9 million have been vaccinated. One hundred breakthrough deaths, therefore, represent 0.002 percent of all fully vaccinated individuals.

The 82.5-year-old median age of the deaths is about five years older than the U.S. average life expectancy, which is 77.3 years old as of last year.

Can I interpret this to suggest that if you get vaccinated, then catch the Kung Flu anyway, you're likely to live about 5 years longer than average? Or would that be statistic abuse?

Posted by Billll at 6:45 AM No comments:

A report on Breitbart says that some 20% of migrants apprehended along the border are testing positive for covid.  They also say that the July take was about 200,000 so we are currently importing some 40,000 covid cases per month.

And this is based only on apprehensions. I wonder what the actual total of illegal crossings is?

So when you see the numbers for total new cases each month, don't forget, 40K of those were imported by Biden.

Posted by Billll at 7:00 AM No comments:

At first glance, this sounds like a good idea. At second glance, it means you can't use mouthwash in the morning before trying to drive to work.
At third glance, wouldn't it be a hoot to stall out someones' car by tossing a small glass of mouthwash through someones' window?
Posted by Billll at 7:32 AM No comments:

So here's the July update. Not near last years BLM riot panic, but 42% up from 2 years ago. 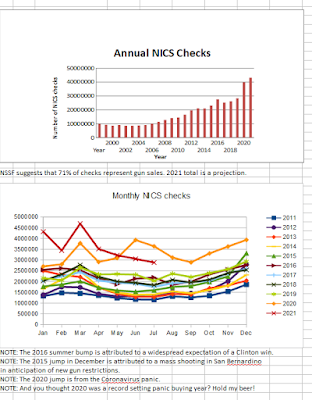 And because I collect this sort of data here's the July year-on-year graph: 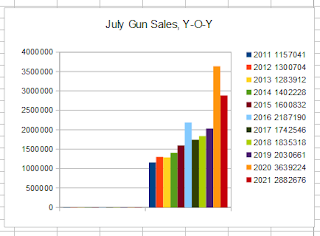 Posted by Billll at 3:32 PM No comments:

From Ace of Spades:

The Boston Tea Party: Tax us without representation and we will destroy the goods meant to be taxed.

Lexington and Concord: Come take our guns and we will kill you.

The Battle of Trenton: We'll cross an icy river and kill you in your sleep. On Christmas!

Posted by Billll at 8:11 AM No comments: