Scott Adams on his latest podcast,  described something he calls Narrative Poisoning which establishes a mindset favorable to specific viewpoints, and goes into some detain as to just how it's done. Relating to revelations in the twitter files, it seems as though there's a noticable path for certain specific narratives. It looks like this

Now any conspiracy theory that originates with the CIA is automatically suspect, but it now appears that a large number of Twitter employees, of high rank, moved there from jobs at intelligence agencies of similar rank. Their obvious shortcomings notwithstanding, the CIA does have some notable persuasion skills. Several examples are cited, and the obvious effort at persuading people to a specific mindset was called out, interestingly, by a Twitter employee from China, who was familiar with the process. The general process leads the targeted audience to take favored positions in spite of evidence that they are seriously flawed. The link is a fun watch.

On a related note, a chatbot, ChatGPT, that learns what it knows from the internet of news and social media, was run through multiple politicalpreference tests,  and was consistently identified as having a strongly progressive bent. This suggests to me, anyway, that the political direction of a people can be easily, if slowly, be turned in whatever direction that a small number of the people in the right positions, desire. The Chinese refer to this as a “Long March”. Short summary: It works.

The chatbot is very popular, and gets to interact with people asking it questions day and night. Its method for generating answers is to scan the web, find the consensus, and put together an answer based on this. Real people know to use this approach with caution, and assign weights to web-derived information based on relative credibility of the source. On average, I'm guessing that the percentage of BS integrated into the mix is going to be higher for the AI than for real humans, who have more experience at this. How much difference is TBD for sure. Persuasively written BS is more persuasive than poorly written gospel truth. Nevertheless the Chatbot is a great demonstration of how the public can be persuaded to a particular viewpoint, however flawed. 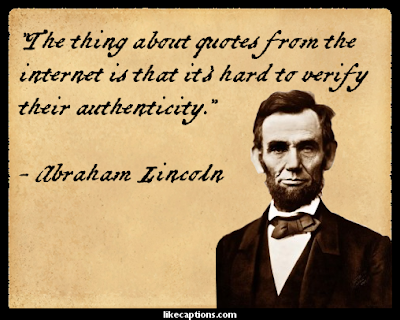 If you want some group to give you money, you can promise to help them, or you can promise to not hurt them. The best models for this are government and organized crime. Government starts out by promising to pave the roads and put up street lights. The mob starts out by promising to not break windows or burn your business down. Guess which offer is the most persuasive. Government has moved up to suggesting that monies donated to certain political parties will defer new regulations that would have the same effect as a Molotov cocktail through the window. Republicans say they won't support the regulations. Satisfied that they are safe from the Right, businesses see no reason to pay the protection money to them.

Posted by Billll at 8:03 AM No comments:

Man, I'm really slacking off on this blog.

Anyway here's the numbers thru November, and yup, we're about where you'd expect us to be. The Donks have discovered that turning their Brownshirts loose, while it does frighten conservatives, simply inspires us to buy more guns and ammo. Now they have to figure out how to take them away from us. They got one-party rule in the last elections, but the Supremes are slapping them back at every move. Anyone care to speculate what they'll do now that they've lost the House? 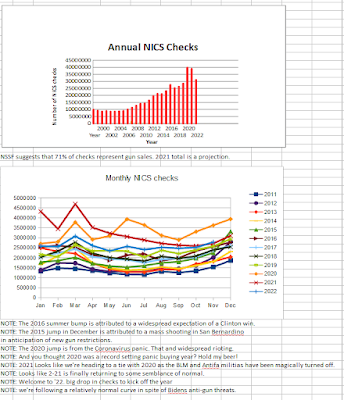 Posted by Billll at 8:43 PM No comments: