This seems like a popular topic for the Donks running for president, all 20,000 of them. They are offering to support amendments to do away with the electoral college, revise the definition of "speech" to exclude "hate speech*", repeal the second amendment, term limits for supreme court justices and all variety of other stuff.

Sen Rubio (R-Fla) is proposing to permanently fix the number of judges on the supreme court at 9 so as to thwart efforts by the opposition to pack the court. This seems like a good start. Drop him a line and encourage him in this. While you're at it, ask him for one establishing term limits for members of congress.

As the Dems continue to ram through anything their management in N.Y. and Cali ask for, one of them is actually noticing that their party may be becoming a bit overbearing. A bill to abolish the death penalty was introduced and run through the Senate without even notifying all of the Senators, including Sen Fields who lost a son to a couple of thugs who are currently occupying death row here.


But Democrats were just getting warmed up. A bill to abolish the death penalty was introduced without even consulting Democratic Senator Rhonda Fie

lds – whose son was murdered in 2005 by two men currently on death row. Fields, rightfully upset, tweeted to her party leadership, “No conversations with victims like me who have been harmed. Voters and victims’ voices matter. What’s the rush?” The disrespect Senator Fields has had to endure by this process is simply inexcusable.

This is rich as Mrs Fields was the Representative carrying the magazine capacity limitation bill in 2013.  Then the Dem controlled legislature didn't care what Coloradans thought and whooped the thing through even though it ultimately cost them 2 seats in the Senate. Taking one for the team is acceptable as we all know that the republicans will never get the state trifecta and even if they did, they wouldn't roll back anything.

So screw us then, screw you now. How's those shoes fit, Rhonda?
Posted by Billll at 12:35 PM No comments:

Our new AG, Phil Weiser (D-Boulder) has opined that any sheriffs who have a problem enforcing our new gun confiscation law should immediately resign.

Someone needs to ask him if Attorneys General who refuse to enforce laws relating to elections, immigration, or drugs should also resign or are they above those laws once you get to that position on the food chain.
Posted by Billll at 9:17 AM No comments:

Here is a reference to a Twitter discussion on the National Popular Vote. If the Dems were really serious about this they would hold their party primary on one designated day nation wide, winner gets the nomination, but why quit there?

Show us you're open to diversity. Let anyone on the ballot who can raise some minimum amount of money toward their election, say $10 million, put that much money into a pot, and again, winner take all.

Even better: Let anyone vote. Citizen or not, D or R. Allow on-line voting from other countries. Who cares. The winner will most likely be selected in advance by the party central committee who will coincidentally be in charge of counting the votes. Someone with experience in vote  counting should be in charge, say Rham Emmanuel. Unless he decides to run as well in which case Robert Mueller gets the job with the proviso that he announce the winner within 2 days of primary day and any ballots arriving after the announcement will be immediately incinerated. No foot dragging. Likewise for all other ballots. Electronically cast ballots will be given the Bleach Bit treatment and the devices recording them will be shredded.

A couple of campaign managers will die of natural causes, and Hillary will get another shot at Trump. Sound fair?
Posted by Billll at 7:43 PM 1 comment:

Always a good idea to ask pols questions, the more embarrassing the better.

In the NZ shooters manifesto is a bit that says that his choice of weapons and tactics was made with the hope that it would spawn more draconian anti-gun laws in the United States, increasing friction between U.S. citizens. We should clearly ask all pols running for office if they intend to support the N.Z. shooters aims if they are (re)elected. It's always good to know whose side the weasels are really on.

I know some people including the N.Z. PM oppose using such a criminals name in any context, but...

Calling a gun grab law "Brenton's Law" or referring to any of them as "Brenton's Laws" might possibly embarrass a lawmaker into withdrawing it or at least watering it down.

Posted by Billll at 7:09 AM No comments:

Should have stocked up on Cinnamon rolls yesterday. Today it's 32 deg (not bad) Snowing (3-5" of heavy wet stuff) Wind 40 mph with gusts predicted to 70 mph!) continuing all day, Power has been flickering for the last couple hours and given the legendary reliability of that in this sort of weather, I've decided not to try to do my taxes. News is reporting 20-30 areas where it's already out.

I broke down and ordered a couple of Pro Mag 15 round mags for the Hi Point which arrived yesterday afternoon, just in time for me to toss them in the range bag and head out for an IDPA match at the local club. Yes, I know you're supposed to test your equipment before the match, but what the heck, it's just a club match and after 4 years of production, the bugs should be worked out.
This is a quick match with 2+ stages*, one a drill type thing and the other more like a regular stage. Space limitations mean that our stages are frequently abbreviated and last night the "long" stage was 13 rounds**.

What the heck, I loaded one mag up to 15 and shot the stage. Worked flawlessly.
For the low light version, I got 3 shots off and had some kind of jam. Hard to tell with the lights out but felt like a double feed. Cleared it and went on. Cost me some time, but other than that still smooth. I finished 6th out of 20 shooters so I'm not complaining. Very much.

I plan to make some time and try some practice on the 5x5 qualifier using the large new mags. My experience is that if you're going to have trouble with a mag, it will be in the first couple of rounds so 5 round strings using the top 5 of the 15 loaded.

* We set up 2 stages, frequently under 18 rounds each, shoot both stages separately, then either combine them into a super stage or shoot the longest one in low light. Or both. Last night we shot the long stage with the lights out.

** 13 rounds is a baseline number. It assumes you get through the whole thing with no makeup shots required.
Posted by Billll at 11:47 AM No comments:

Found this at Ace Of Spades:

"From what I've been able to tell from news reports, here is the Democrats' 2020 campaign platform in a nutshell: 'We hate you, we *really* hate Jews, we hate babies, we hate America, and we want you to starve. Now give us all your guns.'"

Pretty much sums them up don't you think? Here they also want to give our votes away to New York and California, where they favor letting illegals vote. Good thing for them the papers all support this platform.
Posted by Billll at 11:35 AM 1 comment:

Since my last post on this topic, more counties have joined the movement to let the State legislature know that they do NOT represent 100% of the population here.

El Paso county, which includes Colorado Springs, is also considering such a measure.

This from the Conservative Firing Line an online conservative news outlet. They also report that the idea is becoming more popular. 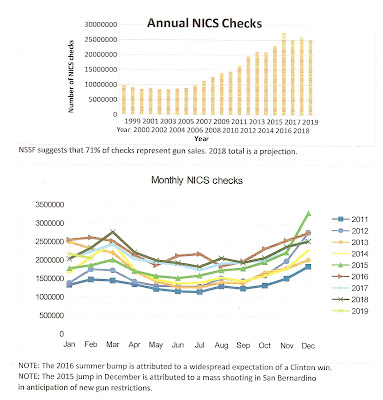 As a famous Senator whose name I forget, once said: "When I feel the heat, I see the light." So keep the heat on.
Posted by Billll at 7:26 PM 1 comment: