In a previous post I discussed calculating reparations based on the difference in income of an average black household in the U.S. vs that of an average household in, say, Nigeria. I think I figured the U.S. blacks owed us some $40-odd thousand dollars each.

Now here's some more info that should muddy the waters sufficiently as to make who owes whom a near impossibility to actually figure out. I knew about William Ellison, but not about the other stories

Posted by Billll at 8:47 PM No comments:

How Bad Is It?

Not here, for a change, but 2 stories coming out at the same time, on the same topic, makes you wonder. First there seems to be a famine going on in North Korea. This doesn't strike me as particularly unusual, but pictures of 'Lil Kim are showing him noticeably thinner. This following his tearful confession that things are tight, food-wise, and he blames himself. Now the news is that there is a larger than average food shortage, at least in part brought on by the closure of the border with China. Rare indeed to see a Communist admit that the current plan isn't working.

More along the lines of what I'd expect, is this story announcing that the latest thing among Chinese youth is the practice of "chewing grass" which has multiple interpretations ranging from voluntarily going on a diet, to doing so involuntarily, Coincidentally, this is happening in concert with reports of poor grain harvests, which includes animal feed. Here's a place where the Greens could actually help us. They need to encourage the Chinese to begin blending their gasoline with ethanol, so that like us, a large percentage of their corn crop can be burned in their rapidly growing automobile population.

While it is true that no one ever went broke underestimating the taste or intelligence of the American public, at the same time the answer to the question "How dumb do they think we are?" is to simply look at the people we elect.

Posted by Billll at 1:44 PM No comments:

It was recently reported that Air Force 2 aborted a trip to Guatemala on account of some strange noises heard on takeoff. So far Ms Harris has avoided any trips very far from D.C. presumably so as to be on the spot when Sock Puppet Joe finally can't be held upright through a short speech any more.

I'm speculating that the strange noises in V.P. Harris' plane can be traced to a rattling of loose marbles in Harris' head.

It also seems plausible to me that Nancy Pelosi has outfitter Harris' plans with a bomb to be used while she's speeding back to D.C. The fortunate twofer would make Nancy president.

Posted by Billll at 4:31 PM No comments:

May NICS Checks - Still Ahead Of The Curve

After the 2020 riot-induced surge in gun sales, you'd thing it would take an actual outbreak of civil unrest to top those numbers. You'd almost be right. The Marxists got their people into office, and have throttled back on the rioting, ecept in Portland and Minneapolis, of course, and the rush on guns has dropped off a bit. I, personally, wonder if some of the drop off is due to people recognizing that while you can still buy a gun, finding ammo is at best difficult and expensive, and at worst, impossible. 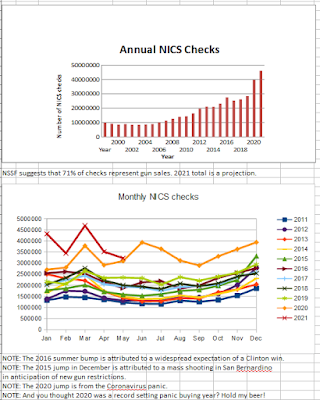 Still ahead of 2020 if only narrowly. Rumor has it that ammo and components may become generally available in 2 years or so.

Posted by Billll at 8:36 AM No comments: