CNN has a way with words, don't you think? Wayne Dupree found this tweet and made a copy before it could be removed: 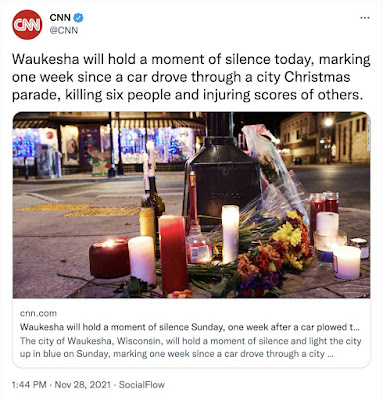 /s/ Horrible, isn't it the way that rouge SUV rampaged through the parade, killing 6 and injuring 40+? On top of being the root cause of global warming, and probably masterminding the development of the Covid virus, the things are now engaged in mass murder. /s/

Posted by Billll at 7:53 AM No comments:

Covid Vaccine - What Exactly Does It Do?

Here's a piece from WND that suggests that the typical Covid vaccine which by no we know isn't actually a vaccine in the traditional sense, may do its thing at the expense of parts of the rest of your immune system.

Vaccinated people under age 60 are dying from all causes at twice the rate of the unvaccinated in the United Kingdom, according to data compiled by the British government.

"I don’t know how to explain this other than vaccine-caused mortality," wrote former New York Times reporter Alex Berenson on his Substack page.

Note the words "all causes" in there. I would hope that doesn't include things like death due to drunk driving accidents, but you never know. To me it suggests that some of the debilities resultant from getting the vax are a result of a degradation of the immune system, resulting in a higher death rate.

As is usual with Covid related statistics, credibility should be very low, still...

Posted by Billll at 7:49 PM No comments:

Not really unexpected, but as an example of the far left complaining about the verdict in the Rittenhouse trial. here's one by Cas Muddle (pen name) in which the poor traumatized fellow opines that the verdict gives right-wing vigilantes the right to hunt down and shoot innocent progressives.

He displays an impressive ignorance of the constitution, which rather tarnishes his creds as a journalist, by failing to note that under the Equal privileges' and immunities clause, if the conservatives are somehow granted the right to ruthlessly hunt down mostly peaceful protesters, then the same privilege would also apply to the left, giving them the right to drive by a Republican gathering, hose them down with bullets, then claim "self defense", should they get arrested.

This is the same M.O. used by Muslims who might stab an unbeliever to death, then, when they are convicted of murder, whine most piteously about oppression of practitioners of the one true faith.

A friend of mine opined about our countries current leadership:

I sometimes wonder how long the people actually running things will keep him around. But then I read about how Harris is out of favor in the White House too. I suppose Biden will remain useful as a figurehead, but as time goes on, his public appearances will become more limited.

As a sock puppet for Pelosi and Schumer, he's about reached his limit. When things begin to fail, as socialist programs do, he will be shuffled off to a nursing home and never heard from again. This is much like Peter the Great, who, when a program failed, announced that several of his ministers had been beheaded. This without telling anyone that he had appointed several heads of cabbage from his garden to ministerial posts for just that situation.

The Dems problem is that the black, female, gay, unborn whale they placed on the ticket to Hoover up a few more votes, is about as qualified to be president as one of Czar Peters cabbages. Having painted themselves into this corner, they first need to replace Kamel-toe with a somewhat more sentient cabbage first, then shuffle grandpa off to parts unknown, placing someone who may well have never even run for president in the Oval office.

One presumes that whomever is running Joe will be running his replacement for as long as necessary. I've seen rumors that Kammy may get appointed to the Supreme Court to get her off the succession list, but that even frightened the left. So think of a prestigious but meaningless job for the Veep so she can be replaced without the party having to admit she was nothing but a figurehead in the first place. Climate Minister perhaps, which would involve giving her a plane, a staff, and an itinerary of meeting with every head of state of no consequence to get her picture taken and sign a climate agreement that gives them a few million to use to improve the climate in their country. New air conditioning in the presidential palace, perhaps.

Her replacement: Pete Buttplug has been put forward, but seeing the job he did with the national supply chain, the reaction has been mostly giggles. Schiff and Nadler would no doubt be interested, but they've already cemented their reputations as pompous jerks and probably wouldn't help the party in 24. Hillary has also been suggested, most likely by people on her own staff.

Say! How about Gavin Newsom, the man who made California what it is today? He could be President by 2022!

Vote Fraud? Maybe Not Quite

In the NJ race for the State Senate, truck driver Durr famously beat long time incumbent Sweeney by 2000 votes. All the way up to someone "finding" some 12,000 more ballots that put Sweeney ahead. From a newsletter I get:

“The results from Tuesday’s election continue to come in, for instance there were 12,000 ballots recently found in one county,” Sweeney said in an email, not naming the county. “While I am currently trailing in the race, we want to make sure every vote is counted. Our voters deserve that, and we will wait for the final results.”

It later transpired that those 12.000 votes came from a county that had already submitted an identical number of ballots, distributed in exactly the same proportions. It was rapidly discovered that they were the same ballots that had already been counted, and when removed, put Durr back where he was before.

Note to Sweeney: Counting votes twice is NOT the same as a recount.

NICS Checks - October, back to normal?

NICS checks have gone down yet again as it would appear that the panic buying over the 2020-21 span has somehow sated the publics desire to provide some modicum of its own security: 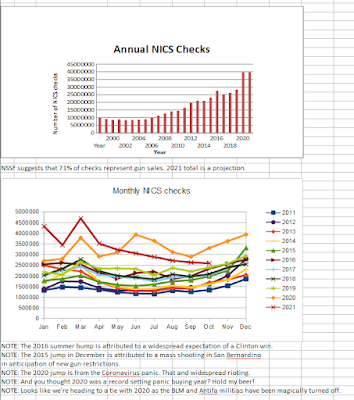 At this point, one would expect to see a bit of an uptick in gun sales as the Christmas buying season is upon us. Of course I could be wrong, and the rapidly increasing inflation is transferring discretionary monies from firearms to groceries. Of course if Republicans start winning elections (don't laugh, it could happen!) the lefts militias might be re-released to burn down some city centers which might inspire another surge in gun sales. Who knows?

Posted by Billll at 3:47 PM No comments:

Chancellor Bismark  (might) have remarked that making laws is much like making sausage in that it's best not to look too closely at the process. Here's an even better one:

When you stop laughing, the rest of the article is here.
Posted by Billll at 10:28 AM No comments: