Stanton opined that a ban on M-16s can stand under scrutiny of District of Columbia v. Heller (2008), because such guns are “outside the scope of the Second Amendment.” She then turned to a ban on AR-15s, saying, “Thus, if a weapon is essentially the same as the M-16, it is not protected by the Second Amendment merely because gun manufacturers have given it a different model number and dubbed it a ‘civilian rifle.’”

Somewhere in the 2nd there must be a "scope clause" that defines the limits as to what sorts of armaments a person may own. I'm looking at the word "people" and not seeing much of a limitation there, and the word "arms" and seeing no definitions or limits there either. Back when the amendment was written, people owned wall guns and field artillery so if we must invoke limits, allowing for modernization that would cover up to 155mm artillery and rifles presumably up to 20 or 30mm.

This looks to me like a good candidate for the Supremes, although even with todays court, giving them an opportunity to make such a ruling strikes me as rather dangerous.
Posted by Billll at 3:13 PM No comments:

Found at Moonbattery, this gem from Corey Johnson of the NYC City Council:

This was met with guffaws of laughter here in Casa Billll, which is a good long way from New York. Firstly, who does he think is using those spaces in the first place, Aliens from outer space?

My take is that if you think about it, there is nothing, I mean absolutely nothing that's done in NYC that can't be done just as easily, quickly, and more cheaply in DFW. Well except maybe for docking ships. In Texas they do that in Houston. Visualize if you will a phone call to your broker, a member of the New York Stock Exchange:

OK, it lacks the stuffiness of money so old the Smithsonian has samples of it on display, but once you get over the overtly helpful ambiance, you'll find the job gets done just as fast as ever.  And never fear, those cowboys will not be bothered in the least at any sum you throw at them. They're already used to it.

Haven't read the article so feel free to tell me I'm guessing wrong:


Pinkerton: Why the Democrats Would Rather Fight Each Other Than Trump

For the same underlying reason the Scots claim they never lost a battle: If both sides are Scottish, then the winner is always a Scot.
Posted by Billll at 11:19 AM 2 comments:

The comic strip Shoe is in reruns and has been for some time now. Included on the site, at no extra charge, is the work of an editorial cartoonist who seems to not view the president favorably. Usually his stuff has all the subtlety of an Antifa rally, but here's one that lends itself to multiple interpretations:

Imagine if you will, that President Harris has named Eric "Duke Nukem" Swalwell to be her Disarmament Czar. Imagine that he starts out near home base, in Alexandria VA, demanding complete and total disarmament of the citizens. Imagine that he is unhappy with the level of compliance from the citizens, and rolls out his trademark move. Imagine the reaction of the Never Trumpers, shown here in the foreground.
Posted by Billll at 8:58 PM 1 comment:

Suppressors - How Well Do They Work?

The folks at Ammo To Go have run some tests on suppressors with both pistols and rifles and published the results here. Spoiler: Rifles don't get noticeably louder or quieter with changes in barrel length, and everything gets about 25 dB quieter with a can. Nice, but only the .22s get below the hearing damage level.

While barrel length doesn't seem to make much difference on the rifles, I have noticed that shooting PCC class in IDPA that the pistol caliber carbines are enough quieter than the pistols that the shot timers sometimes have trouble hearing them. Add a can, and they could become quite user friendly. Alas, no PCCs were tested.

One might note that in the case of the Virginia office shooting, the use of a suppressor on a .45 cal pistol likely had no effect at all on any ones ability to hear the gun and locate the shooter.
Posted by Billll at 3:20 PM No comments:

This could work out. Fly in to DIA, arriving in the morning, and without leaving the airport, do a pub crawl, visiting no less than 6 micro breweries and sampling their wares, top it off with a nice Bacon Gooseburger (maybe at Chick Fil A?), then take a nice nap in a VIP lounge, and catch a late afternoon flight home with a bag full of souvenirs.

Not like they lay golden eggs or anything, just poop all over the place. As migratory* birds, they are protected so us peasants aren't allowed to thin the ever increasing herds ourselves. We'd even get a ticket if our dogs were to bag one on a walk, so the only check on the population is the coyotes and foxes who are woefully outnumbered.

Not everyone has thought this all the way through, either:


Sure, killing geese gets rid of them in the short term, but they just come back, says Marc Bekoff, professor emeritus of ecology and biology at the University of Colorado Boulder.

Yo! Prof! It's called a renewable resource! With a well staffed agency, led by some schmott fellow like you, at a nice 6-figure salary, we could manage the homeless and goose populations here to achieve a stable balance.

*They seem to have forgotten how this is supposed to be done and simply stay here pooping on golf courses and sidewalks all year round.
Posted by Billll at 4:55 PM 5 comments:

Best one around here in years. The firecrackers in my neighborhood sound like a major firefight and the street is hung with a really thick pall of powder smoke. A really noisy message being sent to all government agencies around here: It's independence day and instead of cowering indoors or in the back yard with sparklers, people are out front in the streets with the really colorful, noisy stuff.

A celebration of individual liberty and a big FU to the forces of darkness. Brings a smile to my face.
Posted by Billll at 8:47 PM 1 comment:

Here we are in the summer doldrums and the unusually high gun sales noted last month continues pretty much unabated. Could this be Trump waffling on silencers, the Pelosi House proposing massive gun control, or a reaction to Antifa getting the go-ahead from the Portland police? Or could there be something else going on?
Anyway: 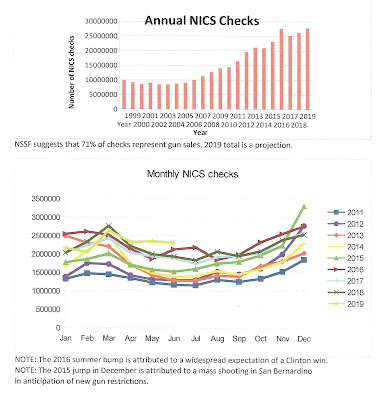 We are now outselling the Hillary Panic of 2016. Harris is currently expected to get the nod from the Dems, and she has promised to begin confiscations in her first 100 days, the constitution be damned. Makes for a great stump speech but I don't think it would get very far in the real world.
Posted by Billll at 6:41 PM No comments:

Vox is suggesting that it's time the left began arming themselves against the < insert insult here > right by way of being prepared to defend themselves.

James Hodgekinson was just a warm-up? All those cops the BLM people shot don't count either? Keep your CCW permit current and buy more ammo.
Posted by Billll at 3:07 PM 1 comment:

Mikuni carbs are fairly complex and the ones on the Virago are the worst I've seen. Someone took them apart at some point and had a couple of very small parts left over at the end. Idle mixture screws are normally a simple screw with a pointy end and a spring to hold it in place once you have (mis) adjusted it to your own personal preference.

I will note that my 84 Honda Sabre still has the anti-tamper covers from the factory installed on all 4 carbs and the engine runs fine. The Yamaha's screws are located deep down a hole where you might well not even notice them, then covered with a plug. They also include a washer and an O-ring along with the spring which must serve some fairly important purpose or they would not have been included. The O-ring and washer were the leftovers on both carbs.

The main jet needles have been through one model change and 2 revisions so I ordered 2 of the latest versions. Needles were ordered 6/23 from Omaha, and the o-rings 7/1 from Seattle. I can't wait to see which one gets here first.

Posted by Billll at 1:30 PM No comments: