In the course of my checkered career I have frequently seen the attitude of "first fix the blame, then fix the problem". Often enough, once the blame has been fixed, the problem drops to secondary importance. Of late one of the proposed scapegoats for school shootings has been violence-filled movies from Hollywood ranging from Star Wars to Hunger Games. In each case, the immediate problem, whatever it is, is solved by the application of force, amplified by weapons ranging from bows and knives to fleets of space going dreadnoughts.

Let's step back a pace and consider that the premise might be correct. The attacker at Sandy Hook, and indeed nearly all of the other school shootings, had a monopoly on force multipliers (guns). What if they hadn't?

At Sandy Hook, the security policy was to lock the school down as a matter of practice, and allow no one in except by ringing the doorbell and having someone from the office come and check their ID, etc, etc. The shooter simply smashed his way in and shot anyone who objected to his presence. Being a gun-free zone, there was no one inside in a position to present a meaningful objection to this by shooting back.

Perhaps it's time to consider trusting the ordinary citizen and put aside reliance on government to solve all our problems for us. Consider this observation I found on Theo Spark: 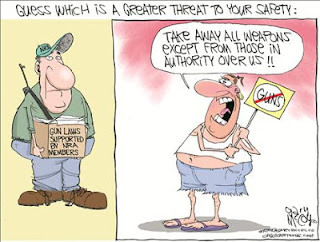 I have to laugh since the hippies have been demanding we question authority and smash the police state since the 60's, but now that they ARE the authority, questioning is no longer in fashion and the police state is part of the solution.
Posted by Billll at 10:31 AM