Insty has this one, particularly apropos after reports of an entire Russian tank column getting lost and running out of fuel on a back road in Ukraine:

FROM A FRIEND: “Ukraine government asked citizens to turn in captured Russian tanks. Citizens replied the tanks were lost in a boating accident.”

Question: Do the Ukrainians also play the banjo?

Posted by Billll at 9:20 AM No comments:

From ProTrumpNews (they kept the name. Why not, it bugs the left!)

Following up, Putin offers to send 20,000 refugees formerly stationed kept at various Russian military bases on condition that Biden move to house them in D.C.

Posted by Billll at 7:30 PM No comments:

Almost another "Fun With Headlines" post but not quite:

Study: Guns Pass Car Crashes as Leader of Potential Years of Life Lost Due to Trauma

I will shamelessly speculate here. The drop in car deaths is due to more people working from home or dropping out of the work force, and the increase in gun deaths is because of skyrocketing crime rates and lax enforcement and prosecution by leftie mayors and DAs.

I expect the Dems will be taking credit for the former, citing higher gas taxes as the reason for fewer people actually being out on the road in the first place, and using their perceived success as a model, will be plumping for a $.50/round tax on ammo and a gun owners license, renewable annually, to cut down on the number of thugs getting plugged by their victims and rivals.

Meantime the Alabama house has passed a constitutional carry bill, and bids to become #22 to do this.

The news won't report this of course but I have it on the best authority* from an unimpeachable source** that Kamala will be meeting with Putin and laying down the law: "You call off the invasion of Ukraine and recall all the troops or you're sleeping on the couch for the rest of the month!"

*A small bird, chirped in my ear.

**I hold no office, therefore I can't be impeached.

Now imagine being tied to the bed and ravished by Anthony Weiner while Hunter stands nearby, stoned, watching. Would that not excite a liberal?
Posted by Billll at 7:34 AM No comments:

NICS Checks - Starting The Year Off

I'm rather surprised to see this. Yes, the panic buying was settling down, but this represents a bigger drop than I expected. Note in the annual overall chart that the projected total for '22 is right in line with the general trend prior to the Covid outbreak and the "mostly peaceful" demonstrations. 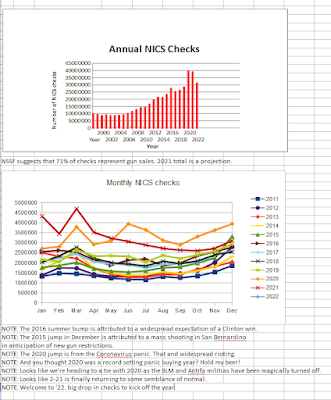 The starting number for Jan '22 is 2,591,588 and the pale blue X is hard to see in the monthly chart. Quite reasonable. Of course it could follow the 2020 curve into low earth orbit depending on what the animated meat loaf in D.C. decides to do. Or what the Czar of Russia or the Emperor of China or Punxsutawney Phil do.

On the positive side a new ammo plant will soon be opening up in Texas and will be manufacturing primers in addition to finished ammo so maybe all those new gun owners and us reloaders will be able to take a trip to the range without arranging a 2nd mortgage from our bankers first. Again, it depends on the unpredictable actions of a bunch of unpredictable people.

Posted by Billll at 3:00 PM No comments:

The supply chain problem is now into it's perennial problem, that being that very little gets done in China (and a lot of the rest of Asia) this time of year anyway, due to Chinese New Year. This fest begins with abut a week to gather ones extended family together, a week to celebrate, and a week to recover, after which it's back to work.

This year it might help by giving the SoCal seaports 3 weeks to try to process the backlog. Grace Meng (D-NY) is proposing that Lunar New Year be a recognized federal holiday as well, bumping the total to 12.

While it's good to hear that all the really big problems facing Washington have been either successfully dealt with or swept under a rug, I have to add conditional support for the idea of another Federal day off. I will support Mrs Mengs bill if she includes a day in October to honor Octoberfest. This would combine support from both the Asian and Northern European communities into a veto-proof majority of national support. While we're at it, how about if we move the Super Bowl to the weekend of the week preceding Lunar New Year, and set Octoberfest Day as the weekend preceding Halloween.

Realistically, the fall holiday should probably be set on the first Saturday following election day so that everyone, regardless of affiliation, would have a chance to celebrate (or mourn) the outcome.

Posted by Billll at 7:48 AM No comments:

O.K. I've sussed it! Those prison camps in XinKiang full of Uhigers don't just make iPhones and sneakers. All the prisoners, on a second shift, are given a box of butterflies which they are forced to shake to get them to flap their wings. Since it is established science* that all our weather is caused by the flapping of butterfly wings in China, this must be the cause of all our weather catastrophes. The joke will be on the Chinese when their weather modification project causes China to be crushed by the glaciers along with everyone else, and the next ice age is named "the Chinese Winter".

*Of course it's established. I read it on the internet somewhere.

Posted by Billll at 9:29 AM No comments: