O.K. very small guns. Homemade toy guns at that. Jeff over at Alphecca had a video of a fellow making a toothpick gun from a single clothespin. I have to admit I liked the shotgun-style slide action cocking and the economy of making the whole thing from a single pin.

Here's my version, somewhat more elaborate, which I used to make in grade school: 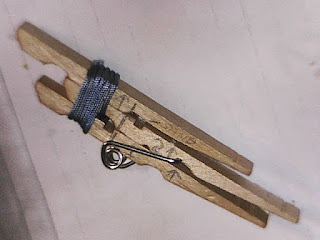 You cock it using the remaining piece of clothespin (not shown) pushing the spring back between the number 2 and the word "sand" written on the top piece. It shoots toothpicks better if you add scotch tape fins to the rear, as well as BB's and small stones.

Modern clothespins with the open wound coils are noticeably weaker than the tight wound ones of days of yore. Evidence of the decline of western civilization.