Any discussion of the shortcomings of Socialism takes about 3 statements to devolve into the hoary whine that "real Socialism" has never been tried, always because "the right people" are never put in charge. This is then extended to argue that "real capitalism" also has never been tried because when it has, it quickly results in something like an oligopoly with a handful of the very rich oppressing the remaining 99% of the population.

The best example of this was the Russian nationalization of agriculture in the early 30's (I think). Instead of hundreds of farmers jointly providing food for a large part of the world, they got 60-odd years of "bad weather" with instead of many well-to-do farmers, they got one VERY well-to-do oligarch commissar.

If you ask what Socialism is, you get a word salad about a happy and prosperous land in which no one is wanting, and recommendations to read a large stack of thick books starting with Das Kapital. Ask what Capitalism is, and the left will describe a system that works much like the old Soviet Union, only with results that almost exactly mirror that system.

Let me try to simplify: Capitalism is trade with some rules to keep people honest. That's about it. Socialism is absolute rule of law with trade being incidental to the rules. No matter what, some government intervention is necessary, on one end to prevent actions that impede trade, and on the other, permitting some trade to keep the peasants from either revolting or simply starving to death. 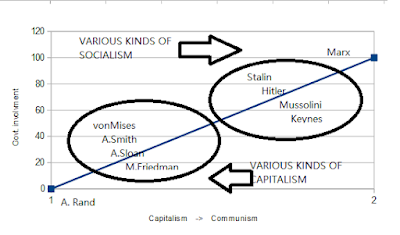 All economic systems fall somewhere along the line. None actually fall at the ends as the shortcomings of the extremes become quickly apparent. If you have a belief in the ability of government to treat its people fairly and equitably, than you may be comfortable along the upper end of that line. I don't trust the government to walk across the street with a burnt match so I'm closer to the lower end.
EDITED to use improved graphic. The names I included are not to be thought of as the last word on any category, but are some that seemed to fit. Stalin, however, holds the far left down quite securely.

Jon Caldera has an article explaining, yet again, why transportation in Colorado doesn't seem to be getting any better. Here's a nice money quote:

When your veins are bulging during your next parking-lot-on-the-highway moment, remember it’s not because we have too little money going to “transportation.” It’s that the money that should go to expand that highway went to a bike path or trolley car that statistically no one is using.

I, personally, suspect that no one working at CDOT actually owns a car. The peons live in a high rise apartment complex about 2 blocks from their HQ building, and the management all have chauffer-driven SUVs. Suburbans for the middle management, and Escalades for the upper ranks.

Posted by Billll at 6:25 AM No comments:

Nearly all women have worked out solutions to these problems with varying degrees of success.

All other problems a woman might have can be solved by applying their solutions to items 1 or 2.

If you reverse the words "men" and "women", nothing else seems to change.

Posted by Billll at 9:31 AM No comments:

The technology to detect mental problems via a skin sensor is out there, it only needs a careful analysis to move from detecting Parkinson's to detecting purposefully generated falsehoods. An AI could probably knock this out in a day or so.

Imagine a politician making a speech behind a podium with contact patches embedded in the speakers surface. Imagine politicians making every speech like an Italian, hands flailing in the air to emphasize every point, and to avoid touching the contact patches.

Posted by Billll at 7:59 AM No comments:

July numbers are out a day early showing another decline overall. 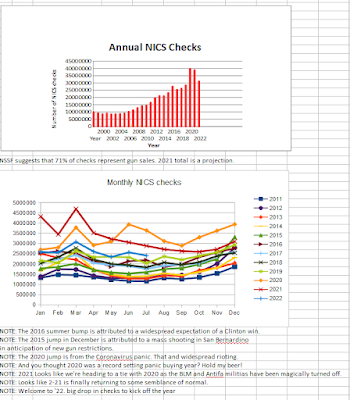 Slightly higher than what would normally be expected, but nowhere near breaking the '20 and '21 records.

Posted by Billll at 2:51 PM No comments: