Could it be that the Dems have figured out that they can get around the unpopularity of packing the supreme court, by egging their followers into assassinating some sitting conservatives so that Biden will get to name their replacements? 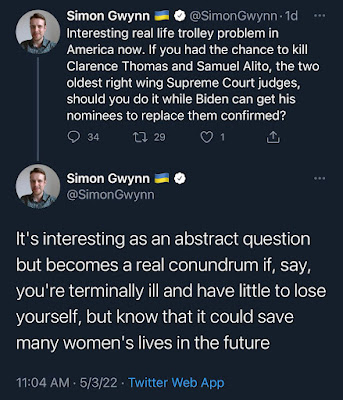 NICS Checks for May

Bright and early, here they are. May saw 2,340,383 checks performed, of which 1,638,681 (give or take some) represented gun sales. Note that this years curve is following the usual pattern, snd dropping as the summer arrives. Of course this could change next month with the Dems usual squeals for more gun bans arise following the Uvalde school shooting.

Could be worse. Up in Canada Justin Tru-dope is calling for a moratorium on the sales of all handguns, which I'm having a hard time seeing that come to fruition. Down here the more radical elements are calling for more oppression of gun owners, and stronger protections for criminals with the usual suspects announcing drinks at 5 to see if they can work out something both stupid and evil*.

So far I'm not seeing much real support for any of that either and if the noise dies out, as it usually does, next months number should be slightly less than this month. 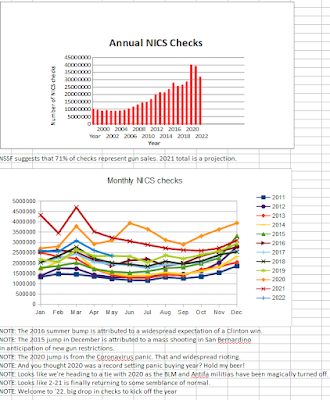 Of course the thought of arming some of the school staffs has again reared its head, so here's my contribution: *There is a quote out there that sometimes get attributed to Republican Senate Leader Everett Dirksen and sometimes not. The quote is that there two parties in Washington — the stupid party and the evil party. Every once in a while the stupid party and the evil party get together and do something that is both stupid and evil. In Washington, that is called bipartisanship.–Erick Erickson, “It’s What Happens When the Stupid Party and Evil Party Get Together,” April 12, 2011.

Posted by Billll at 6:32 PM No comments: