I mentioned some Atrial Fibrillations to my doctor, and I am now fitted with a heart monitor. This is a small (2" high, 1" wide, 3/4" deep) sensor attached with high-strength, waterproof tape to the upper middle of my chest, and a semi-smart phone clipped to my belt. I get to wear this for 30 days. If the sensor company detects anything they think is abnormal, they will call me on my regular cell phone, attached to the other hip, and ask me what's up. If I detect anything I think they should know about, I can use the app on their phone to briefly describe it. All I need is an illuminated star on a hat to complete the Christmas tree similarity.

Could be worse. I had envisioned a complex bunch of wires and sensors, connected to a shoe-box sized device that would detect and report anything that happened to me and download a report on it to my medical file, located somewhere in North Korea.

Imagine this rig detecting something they interpret as a heart attack, and immediately responding with a jolt from the onboard defibrillator. Life saving, no? Imagine going out to an IDPA match wearing this thing, and having it interpret my first 2 shots on a stage as a heart attack. Imagine firing your first 2 shots on the first target, and having the defibrillator kick in as you line up on the second one, causing you to run the next 8 or 9 rounds off at 600 rpm. The good news I guess would be that when you empty your magazine, the machine would interpret this as successful treatment of the heart attack, and shut itself off. The bad news is that standard mag capacity for a pistol caliber carbine, such as I shoot, is 30 rounds. I suppose I would be grateful that no one makes a magazine for my gun bigger than 16 rounds.

Saturday, we will see if the sensor I'm wearing is affected by gunfire.

Doing Away With Colorados Income Tax?

The Independence Institute is now promoting the idea of eliminating Colorados income tax, which is currently a flat rate of 4.5%. This is a modest rate nationally, and works out well as it's easy to calculate.

The other side of this argument is that states without an income tax somehow are more successful than states with one. Texas and Florida, for example, have no income tax. Nice, but they are also run by Republicans, which in the grand scheme of things seems to be a better indicator of a states success than the presence or absence of the income tax.

Look at one more thing here: TABOR. This feature in our constitution, says that the Colorado legislature cannot impose a tax or alter the rates of existing taxes without approval by the electorate. The legislature, and all lower lawmaking bodies know perfectly well how proposals to raise taxes fare when the public gets a voice in their imposition. The solution here is to call everything a "fee" and thus exempt it from scrutiny.

Now we all understand that governments need money. Those Trains, busses, windmills, and public housing for drug addicts don't build themselves, and all those people who don't want to work need to be supported by those who do, so we have taxes. Or fees.

Let's suppose this idea comes to fruition. The income tax revenues disappear, and must be replaced by fees. The fees will initially be modest, and will initially be insufficient, and so must be raised. Probably a lot. Of course if you find you can't afford $500/year for a license plate, you can always sell off your car and use public transportation. Harbor Freight also sells collapsible wagons which should help on your grocery store trips. Maybe RTD will update their vehicles to make getting them on and off easier. An increase in the public transit fee will pay for the upgrades which should be fully installed in no more than 5 years.

Hopefully, someone will amend the implementation to exclude motorbikes and cycles from fee increases, so the less affluent will still be able to afford to drive to whatever job they can find that are not conveniently located along a bus route. NOTE: A typical 20-30 minute commute by motor vehicle, typically takes about 1-1/2 hours by public transport.

Not that I don't favor the idea of changing Colorados tax structure, I do. I just don't trust the people who would be in charge of making the changes.

Posted by Billll at 9:38 AM No comments:

Here's one that's going around: From WND:

China rocks the world with missile that circled globe before dropping on target.

OK kiddies, here's a clue. Go on Wickipedia, and look up "Silbervogel" which the Nazis looked into back in 1942 as a method to bomb the U.S. by traveling at hypersonic speeds, bouncing off the stratosphere several times, and landing in Japan.

Terrifying new superweapon, indeed. Here's a bit more on that. Seems the thing still needs a bit of work:

The test went like this: China launched a rocket carrying what is known as a hypersonic glide vehicle. The missile circled the earth in a low orbit toward its target, which it missed by roughly 25 miles.

Notwithstanding that close only counts in horseshoes, hand grenades, and nuclear weapons, 25 miles is generally considered a miss in the nuclear weapons department.

Posted by Billll at 6:24 AM No comments:

Your head hasn't really been properly banged unless a bagpipe is involved, so go here for some semi-symphonic pieces by Antti Martikainen of Finland who has a knack for this sort of stuff.

In the comments you'll find references to other artists along similar lines.

A welcome break from politics.

Posted by Billll at 6:23 PM No comments:

The Greenest Candidate In Europe

Marine Le Pen has been consistently denounced by the leftist media in France for not endorsing any lefty positions, but now proposes an easy way to get France to zero carbon power production at probably the lowest cost in Europe by scrapping all wind and solar installations, and making the country fully nuclear.

Just imagine, a major European country, NOT dependent on Russia for its energy. Naturally the Greenies oppose this.

Posted by Billll at 8:49 AM No comments:

Here is a breakdown of our new congressional districts as submitted by the all new and certifiably neutral committee on redistricting: 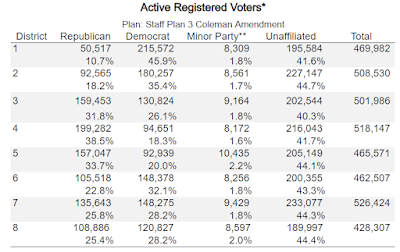 Worth noting is that the Dems have an easier time harvesting ballots, which is legal here, since large numbers of their constituents live communally in jails, institutions, and nursing homes.  What Republicans need is more candidates named Brandon, as the chant of "Let's Go, Brandon!" seems to be quite popular this year.

Not everyone is favorably impressed.

How do you, as an elected representative, make it look to your constituents like you're doing something useful, while assiduously supporting the status quo?

Was there any problem with the 2020 elections? Of course there was! 1: It was an election, 2: there was a lot at stake, and 3: the odds of getting caught were low. So yes, there was chicanery. So what? There's always some of that, but in 2020, it was so blatant, it was impossible to ignore. So what do we do? We investigate!

Oh yes! We Audit the dickens out of certain state elections, and discover all sorts of funny business going on, but we fail to do a complete investigation because some of the players simply refuse to comply with the investigators. Ex: Maricopa County, where the Dominion corp, supplier of the voting machines that famously changed vote totals at 2 AM on Nov 4th in several states, simply refused to let anyone evaluate their software on the grounds that it was a proprietary secret. Sure. Bernie Sanders' business plan was too.

Now there's a call for widespread audits of the 2020 vote in multiple states, which, while probably a good idea, will likely be stalled by Secretaries of State who will have NO interest in anyone seeing how they got elected. Thus while some audits may be started, you can rest assured that none will be completed before the 2022 elections are over and in the bag. Thus we will all be assured that lack of convictions before the election is proof that no tomfoolery went on during the election, and everyone who got elected did so fairly, except perhaps a few whose results will need recounting until the right candidate is shown to be the winner.

Or am I just being overly cynical in my old age?

Posted by Billll at 6:44 AM No comments:

If you don't like the abortion law recently passed in Texas, consider this little gem recently proposed in Pennsylvania.

The bill will force men to undergo vasectomies within 6 weeks from having their third child or their 40th birthday, whichever comes first.

This legislation includes a $10,000 reward to whoever snitches to the proper authority on those who have failed to submit to forced sterilization within the allotted time.

All the best ideas come from China, don't they, comrade?

Sorry this is late, but I was off at a Science Fiction convention watching fighting robots.

The curve continues to underperform last year, as the Democrats have magically turned off their brownshirts in celebration of the alleged election of their best and brightest. 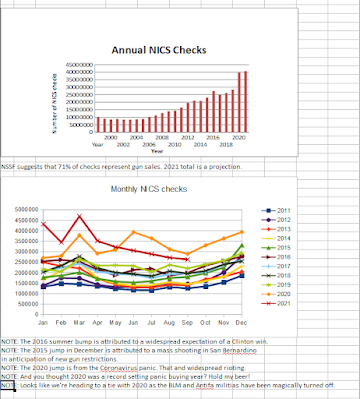 I wonder if they learned that unleashing terrorists on the general public is really a bad idea? I now expect a slow increase in sales heading toward the end of the year as people look to spend increasingly worthless money on commodities that will hold their value.
Recent reports of a significant upsurge in violent crime pretty much across the board will likely support an uptick. The uptick in violent crime is pretty much a lagging indicator that the Lefts policy of emptying out the jails to protect the inmates from Covid is putting the rest of us at significant risk from the newly freed inmates.

Posted by Billll at 9:52 AM No comments: