No less an expert than Rupert Murdoch has weighed in with a tweet:


Terrible news today. When will politicians find courage to ban automatic weapons? As in Oz after similar tragedy.

This was mentioned on Insty, to which a reader answered:

Which is close anyway. Back then even a mega-statist like FDR recognized that he couldn't simply disarm the American public, the constitution wouldn't allow it. Plan B was to impose a prohibitively high tax on selected items, probably with the intention of expanding the list later. Remember as in the case of Obamacare, the legislature cannot demand or forbid the purchase of an item but it can tax.

And tax he did. You could have your machine gun, short barreled rifle or shotgun, or a suppressor if you paid a $200 tax for a stamp. At the time this was a lot of money. An internet inflation calculator I found suggests that in 2012 dollars that would be $3436.13. The going current rate for an AR pattern rifle is about $800 (+/- YMMV) so the tax if adjusted for inflation would be a bit over 4 times the purchase price.

As to mass shootings, Boston.com has a graphic showing about how often we can expect one of these: 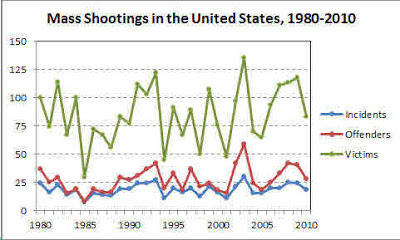 The answer appears to be about 20 times a year. "Mass" in this case I believe is defined as "more than 3". So 20 per year per 300M population or 1 per year per 15M population. Do the math for your own bailiwick.

England is often cited for its draconian gun control which results in crime victims doing more time than the criminals if they try to resist a crime and are found to have used somewhat more effort in the resistance than the criminal used in the crime. Not surprisingly criminals are finding that this favors them. The police there have been under a great deal of pressure to help prove that the Labor-passed laws have been effective to the point that no one actually believes them any more. What reporting there is, however, suggests that the laws aren't working out all that well.
Posted by Billll at 1:40 PM