Looking through an interesting post at Armed and Dangerous on the topic of the definitions of fascism, socialism, communism, and to a lesser extent, capitalism, I came to a conclusion which explains a number of things, primarily why lefties keep telling me that capitalism and fascism are the same. RTWT and don't skip the comments.

So the definitions of all ----isms is a socio-economic system in which harmony pervades the relationship between the governed and the governors, and happiness and prosperity are found everywhere. This seems to be the bedrock definition of all ----isms. To the extent that this happy state of affairs comes up short, the ---isms are obviously being implemented wrong, and someone is found to be at fault for this, and must be corrected/reeducated/arrested/eliminated. When the whole edifice collapses, it's then an example of the ----ism not being implemented correctly, or not "real ----ism".

Or as Robert Heinlein said:"Bad luck".

Goes a long ways toward defining why I went into engineering instead of the softer sciences since I have a lot more faith in the calculated breaking points of materials than I do in the durability of theories built on guesswork regarding human and/or divine nature.

Tangentially related: If you want to depress yourself* get up one spring morning to find a late cold snap has arrived with temps barely above freezing, settle down to read Indian Country by Schlichter, then periodically take a break from his dystopia to check the news.

*Don't know why anyone would want to unless you need some inspiration to sit down at the bench and run off another several hundred rounds of ammo.
Posted by Billll at 10:05 AM 2 comments:

It's not just me, even Scott Adams has noticed the dearth of actual news lately. Aside from stuff happening in France, England and Sri Lanka, there's not much of note going on domestically. The NRA is having their annual board meeting and gun show this weekend, but they're currently tied up in internal bickering that the media can't seem to make heads or tails of, and several more people have announced their candidacy for the Donk nomination for president. So far, Hillary isn't one of them.

On the better news front I heard from Dr. Rob Natleson, a con law expert, on two items recently passed here, the National Popular Vote law, and our Red Flag Bill. He assured us that neither of them would stand up to legal scrutiny as soon as they get to the right court.

The NPV measure is in violation of a couple of items in the US constitution which means the 10th circuit would be ultimately hearing that one. Problem is that no one would have standing to go to court until someone won the presidency who would normally have lost the electoral college vote under the old rules, so there's a land mine that's likely to remain buried for a long time.

The Red Flag law would be subject to challenge as soon as it's applied to someone and would be heard in the Colorado courts. The problem with that is that the Colorado Supreme court would likely uphold a law re instituting slavery if it had been passed by Dems. They are currently looking at our magazine ban law and I expect they will uphold that easily.

Colorado has, in effect, 4 branches of legislative government, the Governor, the Senate, the House, and the people. If the first 3 branches pass something the people don't like, the people can demand that law be put to a referendum to be held at the next election. The professional pols don't like uppity peasants, so they add a clause to almost every piece of legislation they pass stating that the legislation is critical to the safety and well being of the people. This exempts the legislation from the referendum process. Needless to say everything down to adjustments to parking ticket fine amounts is critical to the public safety. Somehow they left this off of the NPV law. At this point it looks like it will be petitioned on to the upcoming ballot.

The Electoral college is currently set up to slightly over represent states like Montana, but makes up for that by over representing California. States get 1 EC vote for every representative they have, and they get 1 Rep currently for every 750,000 warm bodies regardless of what sort they might be including convicts in jail and non citizens currently residing in the state. Cali has 5-10 million (depending on who you talk to) illegal aliens who, although they aren't supposed to vote, are represented in the US House and on the E.C. This doesn't seem entirely fair to me, so I asked the good professor about a possible fix.

Back in the day when all this was being discussed, the issue of representation came up and the northern states noted that assigning reps on the basis of raw population alone effectively gave the slaves several representatives, none of whom were elected by the slaves. This led to the 3/5 compromise which kept the slave states from running the show in the house with reps they got from non-voters. When the slaves were freed and declared to be citizens, this became moot but I suggested bringing this back with respect to non citizens. I was assured that this proposal would NOT fly. It would cost Cali, and probably Texas and Florida  3-5 seats each but those would be allocated to other states who would be glad to get them.
Posted by Billll at 2:57 PM 1 comment:

Planet Of The Apes - The Story Begins

At least it's currently confined to China. Should any of the "uplifted" monkeys get shipped to the U.S. the field of candidates for the Dem presidential candidacy would immediately become a lot more crowded and accusations of speciephobia will be bandied about.

Might be fun to see what happens if you give this treatment to the great apes. Some of them already can use sign language to communicate and teach it to their offspring. The ability to give a coherent stump speech is all that stands between an Orangutan and the White House or at least a House seat.
Posted by Billll at 12:36 PM No comments:

In the form of Eric "Turn in all your guns or I'll nuke you" Swalwell.

He's working on a catchier slogan. I told him that here in Colorado, all our illegal weapons are hidden in an underground bunker located under the state capitol building. If I thought he was telling the truth, I'd likely be backing his campaign but since he's a Dem, the odds of that are vanishingly small.
Posted by Billll at 8:18 AM No comments: 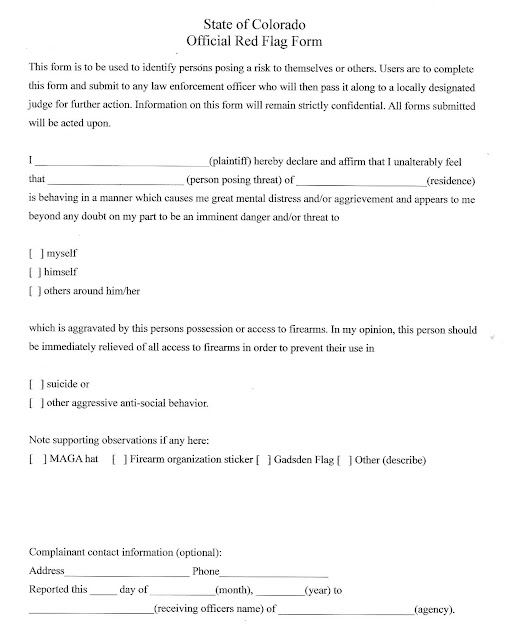 O.K. I admit to writing the whole thing. I apologize in advance if this thing shows up on some law firms letterhead.
Posted by Billll at 8:06 PM 1 comment:

Behold the expected jump in gun sales as we get our tax refunds. Since these came as slight increases in paychecks over the last 12 months, the refund checks may be smaller. Still, it looks pretty normal at this point. 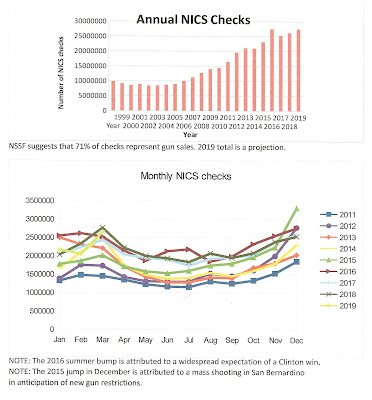 Posted by Billll at 6:54 PM No comments:

Fount this at No Lawyers - Only Guns And Money: 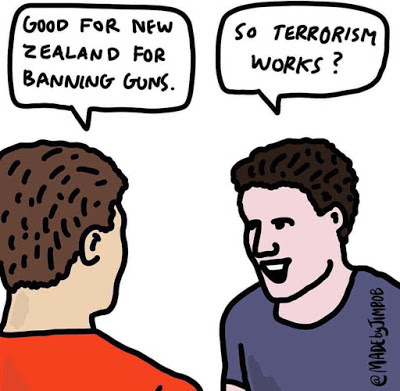 From Made by JimBob who posted it on Instagram.
Posted by Billll at 6:01 PM No comments:

In addition to the proposed amendment limiting the U S Supreme court to 9 members, which I had heard about, it seems that Sen Rubio has introduced another one limiting terms of congress people to 3 in the house, and 2 in the Senate.

Since both of these require a 2/3 majority in both the house and senate, I imagine we'll see small elephants fly to mars first. Still, it's a nice thought. Next time you're writing your senator or representative, add in a request that they co-sponsor these bills.
Posted by Billll at 8:08 PM No comments: