Here's an egregious example of racism if ever I saw it: Michael Avenatti got 2-1/2 years for extortion trying to shake down Exxon for some sort of climate crime, and yet Al Sharpton, having made his entire career out of extorting people and corporations on a race basis, is still a free man.

Mr. Avenatti has a good basis for getting his conviction overturned on the basis of disproportionate impact on white people.

This poll suggests that Coloradans love being East California and all that entails, but...

I am suspicious of a poll showing large majorities in favor of rapidly increasing taxes, including fees, high unemployment, large homeless encampments, a new taxing zone for a high speed rail corridor, restrictions on charter schools, etc, etc. When you take a poll, you poll large numbers of people, and sort them by political affiliation, then adjust their weighting to match, say, the turnout from the last election. As well, the poll runs an incumbent against an unknown opponent, never a winning proposition.

Now let's assume that Colorado used the same Dominion voting machines and tabulators that gave Dems a 2-5% boost across the board. One could be left with the idea that there are a lot more "Bernie boys" in this state than there actually are, and that thus, far left positions are much more popular than in actual fact. This can also bias later polls which would be weighted to match fraudulent voter data. Done carefully, this sort of thing can convince the majority that they're in the minority, and depress their turnout in elections, and convince them to leave the state.

This Rassmussen poll suggests that the far left is far less popular than the media would have you believe. The trick here is to get honest polling data out to the electorate to give them some confidence that they are not lonesome voices crying in the wilderness.

UPDATE: I seem to have been right.

Rather depressing, but probably true, these 20 observations by a British rapper.

For a change, here's some news about alcohol that doesn't involve burning it. Seems this fellow has come up with a way to turn alcoholic beverages into something resembling ice cream, or at least soft serve.

Yeah, I know, the purists among us will denounce this as alcohol abuse, especially as it seems to work about as well with single malt Scotch as it does with beer of any sort. The extremes though probably are alcohol abuse on the one end of that spectrum, and reportedly abuse of the consumer on the other, so if you but one of his machines (about $6000-$7000) don't pour in either Glenfiddich or Coors Lite. 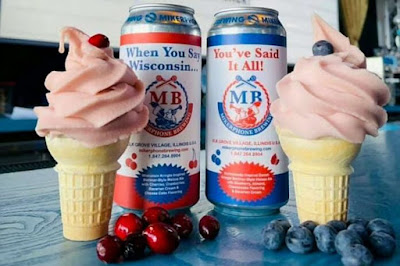 Posted by Billll at 3:56 PM No comments:

Israeli doctors may have figured out how to make animal organs transplantable into humans:

Posted by Billll at 8:29 PM No comments:

Big celebrations all over the country on the august occasion.

It also appears, even though accurate records are a state secret, that the CCP has averaged 1 million murders per year over the last 100 years, to keep itself in power.

Posted by Billll at 8:31 PM No comments:

Fun With Headlines - The Clintons

I Own The World has this one up:

Let me say right now that Judge Loretta Preseka did NOT kill herself. There! Tomorrows news today with the accuracy of Izvestia and the credibility of Pravda!
Posted by Billll at 6:49 AM No comments:

NICS Checks - Back To Normal?

The numbers for June are in, and I have to note that they are coming in earlier than they used to. I guess in off-election years, the FBI has little else to do when not hounding Republicans, so they get the routine stuff done in a timely manner. 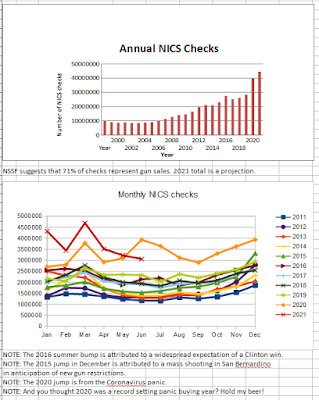 The 2020 curve had approximately the right shape, except for a big surge during the summer that corresponded to the "mostly peaceful" demonstrations in large urban areas. This year, the leaders of the demonstrations are being installed in high government positions, and with the big salaries and access to whomever is controlling the president, there are fewer peaceful riots.
On the positive side, there is now a faint possibility that ammunition manufacture will begin to catch up with demand. The problem is that if demand drops back to "normal", existing capacity may be enough to keep up. This reduces the benefit of building a new manufacturing plant or expanding an older one. The other problem, on the horizon, is legal requirements to put serial numbers on every bullet so that when Crip A shoots Blood B, the authorities will know which gun store the ammunition was stolen from, and will move quickly to shut it down, preventing law-abiding citizens from defending themselves from the criminals.
Politicians who boast about taking such actions get re-elected by slightly larger margins than their previous effort. To find out the margin ask the head of DNC what margin he/she/it told Dominion to have their candidate win by.

Posted by Billll at 6:36 AM No comments:

Jon Caldera has a nice piece up at Complete Colorado describing in great detail what the notion of "local control" means to Democrats. Bottom line, the state can make living here as onerous as they want, and localities are permitted to make it worse. But only worse.

For myself, I've been ready to decamp to a freer location for the last 10 years as I see Colorado becoming East California, and no real chance of it ever being reversed. After all, our Secretary of State has assured us that we have the cleanest election process in the country, and it's so free of taint that she has issued a ruling that it shall be illegal to investigate any aspect of it.

The reason I'm still here is my spouse, who sees proximity to her sister and daughter as being worth any inconvenience the state wants to impose. She reminds me of a prisoner in the State pen who has served his sentence, but doesn't want to leave because all his friends are there.

Posted by Billll at 5:09 PM No comments: