H/T to Sondra K for the tipoff on this little zipper. 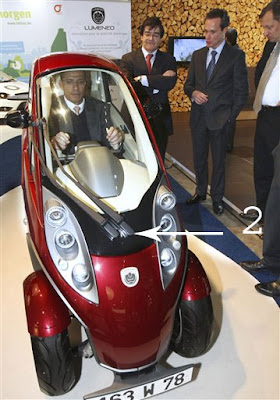 The Lumeneo, a 2-seat electric that combines the 4 wheels of a car with the leaning of a motorcycle over an electric drive train. The thing claims a top speed of 80 mph, and/or a maximum range of 93 miles, which actually represents a 30% improvement over typical lead-acid electrics. I'm not sure if the number 2 refers to the number of wiper blades or what.

Back in the early 70s, Corbin-Gentry marketed an electric motorcycle that would deliver 75 mph and/or* 75 miles to a recharge. Corbin later, minus the Gentry, produced the Sparrow, which had similar speed and range combo numbers. More interestingly, someone bought the bodies and swapped in Harley-Davidson engines that would deliver 130 mph, and 5 minute "recharge" time at the local gas station.

My interest in electric exotics like this, and the Smart car, is limited to what can be done with them when you throw away the batteries, and install about 3 times as much gasoline engine as you actually need, although, in all fairness, this might make an interesting enclosed motorcycle with a 350cc engine in it, delivering 60+ mpg, and all-weather transport. The flaw is the 4-wheel design, which in the U.S. makes it a car, and subject to all the Federal crashworthiness doo-dads that typically add about 1200 lbs to the weight of anything.

Modifying the undercarriage to a 3-wheel configuration would allow the vehicle to escape the federal regulations by qualifying the machine as a motorcycle in most states. Similar to the Piaggio MP3, 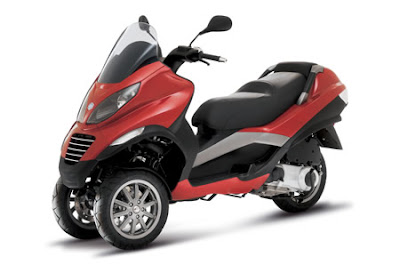 this would compete directly with the Aptera, assuming that there ever is an Aptera to compete with. The use of gas engines makes the platform more salable. The Piaggio is currently available at dealers all over the country right now. If only it had weatherproofing of some sort.

*and/or: The vehicles could deliver the top speed briefly, or the maximum range eventually, but not both simultaneously. It seems to be a characteristic of electrics.
Posted by Billll at 7:41 PM

Whatever happened to this:

Well, the EcoMobile is interesting, but I'd worry about forgetting to lower the outriggers. I suppose that could be automated, but I don't want to contemplate the failure mode.

However, I'd like to see a motorized low-slung tadpole configuration, with protection from the elements, and enough cargo space for small grocery runs. Something like a Honda V4 (V45 / V65) engine would be nice -- with the camshaft wear problem fixed (minor issue). I suppose you wouldn't to so low-slung that other vehicles don't notice you.

As to Jed's comment, I did build something like he was talking about, but without bodywork, since I have no idea where to start in that regard.