The Future of Transportation, Pogos

Back in 1951, the Navy was looking for something that could quickly rise into the air and deal with the threat of Japanese Kamakazi attacks. Eventually they settled on surface-to-air missiles, and the R2-D2 radar directed Gatling gun. Between there and here, they came up with the Zimmer flying pancake, and the Convair XFY-1 "Pogo". 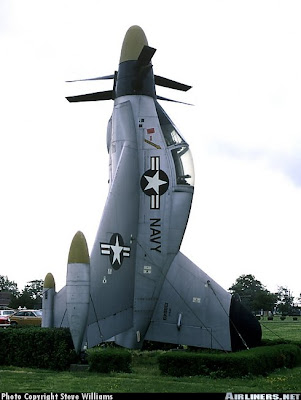 As a kid, I actually had a plastic model of this thing. The idea of launching and landing an airplane in the same manner as the spaceships I expected to roll out shortly afterword had a great deal of appeal.

Today, we have the latest variant on the flying car in the form of the Puffin: 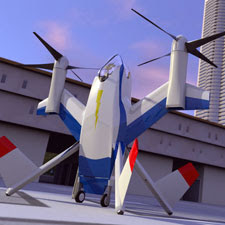 This update to the Pogo comes from NASA with help from MIT and Georga Tech. And it's electric, so no pollution, except back at the coal-fired power plant where the electricity to charge the batteries comes from.

In principle, the Puffin can cruise at 240 kilometers per hour and dash at more than 480 kph. It has no flight ceiling—it is not air-breathing like gas engines are, and thus is not limited by thin air—so it could go up to about 9,150 meters before its energy runs low enough to drive it to descend. With current state-of-the-art batteries, it has a range of just 80 kilometers if cruising,

So it can fly high enough to kill the pilot from anoxia, and come down close enough to his launch point that the airport of origin could probably provide the ambulance. Note also that the range is somewhat less that you could expect to get from an EZ-GO golf cart, although your arrival would certainly be far more spectacular.

In it's defense, if you think of it as a variant on the backpack jet, it begins to look better. Notably bulkier, it goes a whole lot farther, and makes a lot less noise doing it.
Posted by Billll at 8:38 PM

I remember reading about the Pogo. Most ideas like these have some sort of problem or other -- see the Osprey.

Now the AV8-B, that's a different kettle of fish.