Because everyone else is doing it.
Drudge has Trump winning big: 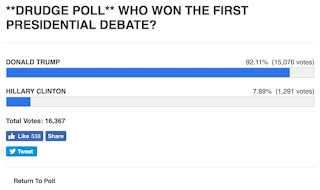 I'm sure the New York Times has a similar poll with similar proportions showing Hill the winner. It's a problem with polling your own followers or employees. Maybe Real Clear Politics will give us an average of some 10 or more polls from reputable sources. Meantime here's a good sized set. I counted so you don't have to. Trump won 16:1 by varying amounts.

My take:
1. Trump didn't fly off the handle and Hill didn't collapse. Kudos to Trumps shrink and Hill's medical team. Her cosmetologist deserves credit as well, she didn't look a day over 40. I had a quiet side bet with myself that neither of them would make it past the 1 hour mark. I lost, so I owe myself a beer.

2. Hill was more polished and better prepared. I suppose that spending 11 hours before a Senate panel repeating the 5th amendment is good practice, although he performance at remembering all those talking points makes you wonder about why she can't seem to remember anything else when seated in front of a Senator.

3. Hill put out some whoppers that Trump let slide. Yes he called her on some, but he missed several as well. The audience seemed to be catching the BS fairly well.

4. Hill pushed the "racist, crazy" meme and Trump brought up the "crooked, untrustworthy" bits which seemed to stick better.

I watched the debate with a bunch of fellow deplorables at the Waters Edge Winery 2101 East Arapahoe Road #101 which isn't near any water at all. The black rasberry Merlot was delicious. To see how this helps the candidates, go here.

"Drudge has Trump winning big" by about 90%