To go along with the finding that some 40+% of U.S. households are now willing to admit to a stranger on the phone that they have a gun, note also here the sales anomaly for June and July. 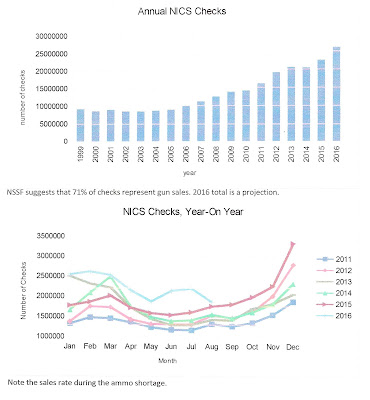 Summer usually represents the doldrums for gun sales if you consider 2M/month to be doldrums. I guess you hold a riot or two and pass some state level laws and everyone runs out and gets one while the getting is good. Since 2006 population increase has been about .83%/year so one would expect gun sales to follow the population curve. Over the same period year on year gun sales have increased by about 10%/year or about 12 times faster than the population.
Posted by Billll at 7:37 PM

The percentage of the U.S. population that are members of the following groups are

What are gun owners doing so horribly wrong in terms of persuasion?

Obviously, there’s some rounding error in the above figures. And since data are from different years and sources, they may not be directly comparable, and some of it may be out-of-date. My data collection was not rigorous. And since Blogger limits the number of words in these comments, I won’t go into details about the caveats. But the above figures are good enough for comparison purposes.