A couple of posts down there's a Drudge poll showing Trump with an implausibly wide lead. Not surprising as the poll was taken on line from Drudge readers who tend to be pretty conservative. Here's one from Buzzfeed 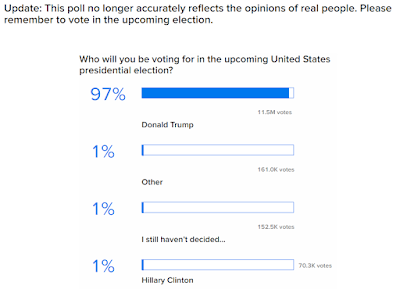 This tells you more about Buzzfeed users than Trumps actual standing with the American public.

Still, you can tell a lot about someone both by the people they befriend and the enemies they make. The U.N. for example is made up of representatives of some 170 governments, most of which could be fairly categorized as genocidal tinpot dictatorships. Having this group come out against you to me is a selling point. Finding yourself allied with the UN is questionable at best. The U.N. is one of those things that wasn't thought completely through on its founding. Instead of being a universal elective democracy, it should have been a somewhat exclusive country club with a per-capita GDP minimum requirement for membership. This would automatically exclude most if not all of the tinpots and most of the socialist utopias as well. The members could vote assistance to any non-member trying to elevate itself to member status but not to the incorrigible sink holes. It wouldn't take long for the citizens of the sinkholes to figure out what sort of leadership would make them wealthy enough to get into the club.
Posted by Billll at 8:21 AM