Living With The Wild Life

I was out picking dessert from the raspberry patch when my neighbors son called to my attention this piece of high density housing that had sprung up in the lilac bush: 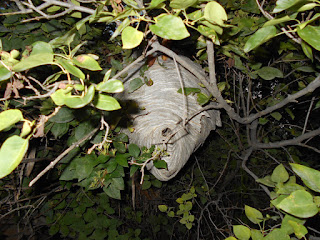 Click to embiggen. You can see one of the residents on the twig next to the entry hole and several more just inside. The entry hole is about 1-1/2" in diameter. I found one of these a few years ago in the early fall and brought it home as all the wasps had died. Cut it open to see how it was built and found that it consists of several stories of honeycomb layers, small ones on the upper and lower ends and big ones in the middle. No honey, just cells. The wasps seem to die off in the fall and leave the nest empty. Not sure if the nest typically survives over the winter but I don't think so.

UPDATE: These are Bald Faced Hornets, an invasive species but considered beneficial as long as you don't get into territorial disputes with them. They eat other insects, specializing in yellowjackets, but will switch to pollen if that food supply dries up. Most of the nest dies over winter but a few eggs survive to start the hive the next year. 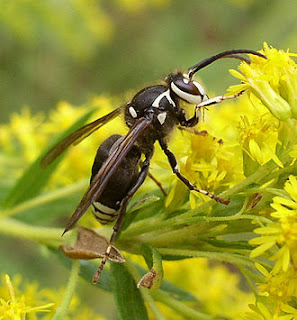