Muslims in England have reaches a landmark 5% of the population, and are feeling their oats. They now define areas in several towns as Shariah zones, exempt from English law, and subject only to Shariah. To this end, they have begun posting warning signs: 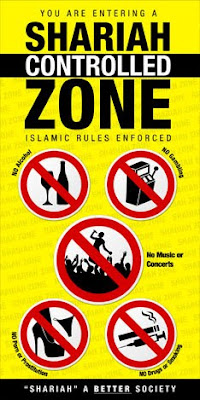 Click to enlarge. Of course it's all about righteous Muslims being oppressed by nasty crusaders, at least in their minds. Gates of Vienna posted on this and left the link. In the comments was a suggestion to make up overlying posters in a similar format describing what is permitted, such as lying, stealing, and murdering. See your local Imam for a list of approved targets, and get your score card here.
Posted by Billll at 7:52 PM

Where is the part about no quarter or mercy for infidels?

And how can England consider itself a sovereign nation, with Sharia ghettos that don't permit English law to be applied?

This is nothing less than naked rebellion. Allowing the Islamic to secede accepts that interpretation.

I wonder if Oklahoma, or Texas, or some other state, might post signs "Entering Constitutional Law zone; only regulations and laws adhering to the Constitution apply."

Wait. Arizona tried that, and the US feds threw a snit fit. I wonder if Obama would have reacted the same way if Arizona had posted the Sharia law notice.