The Courage To Do Nothing

Several things have floated to the top that suggested this title. First was an article at Right Wing News, pointing out that higher fuel economy standards have become the leading cause of death and dismemberment on the nations highways. O.K. they're a factor. I contend that alcohol has an influence here too, but after the drunk has driven through the red light, the lighter vehicle usually fares the worst.

Of course the statistics that support this case, also fog the issue: 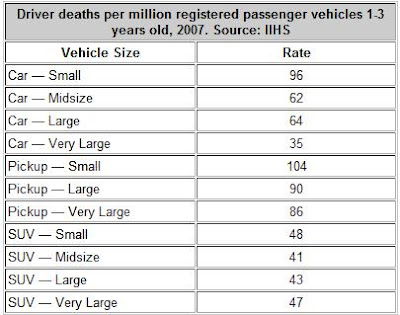 What's wrong with this picture? Well, as a general rule, the bigger the vehicle, the lower the fatality rate. But look at the pickups. You have to get into an F-350 pickup to reduce your chances of getting killed in an accident to less than your chances in the smallest econo-bubbles.

Of course the fact that most pickups are driven by men may also be a factor, but hey, bigger in general, is better.

People buy smaller cars to save on gas. They would do this anyway since the department of Energy is out there insuring that all the oil we use to produce the gas comes from countries with governments that hate us. Absent CAFE standards, people would still buy smaller cars, just not quite as many. Absent the DOE, we would still buy some foreign oil, just not as much of it.

The economy's in the doldrums. Why? Because, in large measure, because the government is in there trying to help. $1.5T to bail out businesses and governments, rewarding them from their own bad practices in effect, using money we didn't actually have in the first place. Hardest hit are those near the bottom. The minimum wage is high enough to make hiring someone at the entry level more expensive than they're worth. It also makes hiring an illegal at sub-minimum wages and no benefits a worthwhile proposition.

Just think how much better we'd be doing if none of the above mentioned government programs had never been implemented in the first place.
Posted by Billll at 12:27 PM

There is a happy medium to this.

Just thought I'd point out that your chart doesn't seem to control for miles driven. But I suspect that a far greater percentage of trucks than cars are work vehicles and are thus driven a lot more, which I would expect to cause more crashes.

If you found a chart of deaths per x miles driven or deaths per x crashes you'd probably see the trucks closer to the SUVs. And the small cars might do a tad better since they are favored by couriers and people with really long commutes.

I think that the reason for pickup fatalities is the fact that pickups are more prone to rollover accidents than passenger vehicles.

When the NTSB (I think) did a study to determine the effectiveness of ABS the only category of vehicle that had improved results was pickups, and their cited reason was that pickups had a distressing tendency to slide backwards off the road in a skid and flip over.

ABS was somewhat effective in preventing this, but not as effective as they'd hoped. Maybe this is why pickups are so deadly.

People complained that large vehicles are more dangerous to small vehicles, but that ignores the fact that most accidents are single vehicle only. The tree you hit isn't going to be any smaller just because you are driving a Geo Metro.

I'll be the first to admit that the chart controls for nothing but size. Yes, pickups tend to be business vehicles, and thus have a greater exposure, and Everyone is aware that an unladen pickup is very light in the rear and prone to spin in a panic stop situation.

I recommend P.J. O'Rourke's essay on the "High-speed handling characteristics of pickups", which I believe was originally published in Car and Driver. His explanation of the difference between oversteer and understeer is priceless.

Drake: I notice that SUV's are dangerous at both ends of the scale, and noticeably safer in the middle. Perhaps there's a middle ground where size and safety balance.

Sean, I've rolled a small pickup, rollover accidents are not that dangerous if you are wearing your seat belt. The biggest danger in a rollover is ejection. If you stay in your seat you will most likely walk away from a rollover. I' rather roll a car then hit a tree.

My only injury was a cut in the back of my head that I got from hitting the rear window, I got 2 stitches.