Those of you who follow my rants and raves, know that I have a Hi Point carbine. You also know that I'm not shy about pointing up sone of its shortcomings, it is after all, built to a price point and is not a high-buck fly-shooter.

Being an engineer, our motto: "That's not how I would have done it", I've been fiddling with it to attempt to improve the accuracy. Last weekend I shot 2 half-inch groups at 25 yards, so I'm greatly encouraged, however I also got a couple of jams that resulted in a bent firing pin. 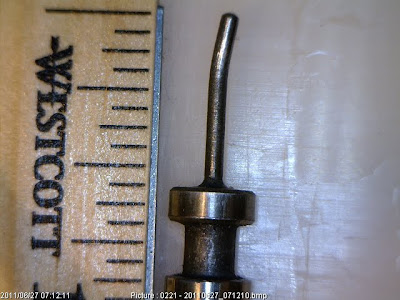 When I called Beemiller, the manufacturer, and told them I had a bent pin, all they wanted to know was my mailing address, and it was in the mail. I called them at noon Monday, and the new pin, a new version with some changes, was in my mail box at noon on Friday, at no cost, and not just the pin, but the spring set that goes with it.

I've heard that a new design was out, and that it worked better than the old one. Having seen the new one, I have high expectations that this will be the case. I'm going to the range today to hunt the wily wild bowling pin, and try out the new pin. Film at 11.

Update: All the test shots went off without a hitch. Bravo!
Posted by Billll at 5:46 AM