You know it's going to be a good day at the range when preparations involve checking the tire pressures on the stuff you're bringing. 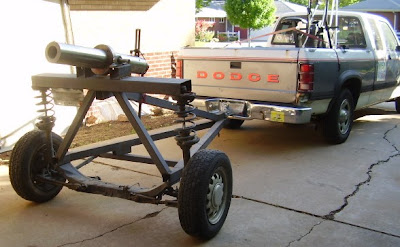 Muzzle velocity can be calculated, the proof is left as an exercise for the students. Ballistic coefficient for a 303 can? It can't be good.

I brought along the pedal air gun which when I arrived, drew comparisons to some of the improvised anti-aircraft systems recently seen in Libya. 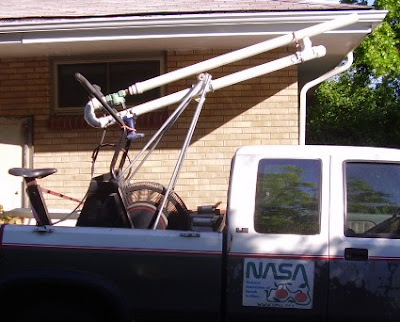 One of the kids fired one of the 12-ga darts from it at a steep angle instead of toward the backstop. I found it embedded in the ground some 175 yards downrange. Great fun, every kid should have one of these.

Walking up and down the line I saw a 2-bore rifle, an 8-gauge rifle, a .50, a suppressed Ingram .45, and enough more conventional stuff to keep someone drooling all day long.

The food was good too. Imagine a large Styrofoam cup. Now layer it with 1) mashed potatoes, 2) BBQ beef / chicken, 3) BBQ beans and top it with 4) Cole Slaw. Serve with a fork and a lemonade. Compliments to Juan, the chef.
Posted by Billll at 4:18 PM

I gotta ax ... Did Chef Juan have a name for that there bbq in a cup?

There's a company around here that sells a "Meat Parfait", similar to what Chef Juan has cooked up.

I am informed by Cy, who is Juan's long lost twin brother, that what we had for lunch on Saturday is called a June Bowl and it was originally created by KT's BBQ in Boulder.

Yeap; the dish was shamelessly stolen from our buds at KT's BBQ though I will say that Juan made a huge improvement on it by using hot links instead of sausage. Mmmmm!!