3 years ago a friend presented me with a piece of heavy wall stainless steel pipe, and asked if I could turn it into a cannon. The answer to such a question was yes* with the disclaimers associated with that asterisk running on at some length.

So the thing got built, and I did all the math, and concluded that as long as you don't think you're going to war with this, it can provide some amusement. 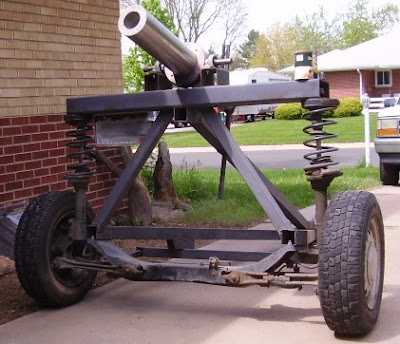 The gun is 36" long and has a 3.06" bore, which closely fits a 303 can of the sort used for dog food or Spaghetti-O's. Said can, filled with cement weighs about 2 pounds, and with 15 degrees elevation will reach out an impressive distance. Even better, is a can full of lug nuts, the long kind with one end closed, which whistle ominously in flight.

Firing is by percussion cap: 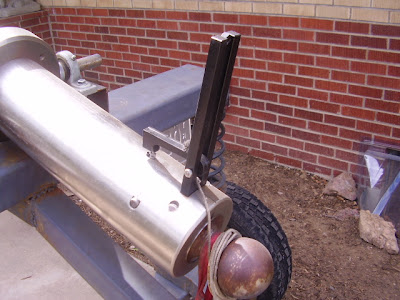 It occurred to me rather late that a swinging arc mounted at the top of the rear sight could be calibrated in yards of range for a light charge on one side, and a heavier charge on the other.

This is NOT a replica of anything. It's a black powder toy. The carriage is made from the rear axle of a Ford Fiesta, and has been voted "Best Use of a Ford Fiesta". Since this is a towed (2" ball hitch) piece of equipment, there is a license plate and associated paperwork. Don't worry, it's not a registered gun. The paperwork describes this as a"light utility trailer". The frame has been painted primer gray. Someone with the right facilities could doubtless touch up some details.

The fellow I built this for has paid me, and now discovers that it's a bit larger than he imagined, and his garage is full. Asking price is still being hammered out. Suggestions (offers) will be considered. I'm probably more flexible than he is. I need the garage space.

Update: Gun has been sold.
Posted by Billll at 8:08 PM

For the right price, I'd fly out to Colorado and rent a U-Haul...

So what would you consider the right price to be?

We love Florida, and we love guns. We are just a bunch of dudes who want Gun For Sale Florida with ease. If you have any questions, feel free to contact us.