This didn't work out quite like I planned. The original idea was to take the gun to the club IDPA shoot Saturday, and let anyone with .40 S&W ammo run a few rounds through it while I kept track of the chrony, and listened to comments. Unfortunately the match got rained out.

Today, I pretty much had the range to myself (nice), but not so much ammo testing and commentary.

Anyway... The gun worked quite well, right out of the box was hitting about 1" high, and 1/2" left at 25 yards. 2 clicks down and one click right (the adjuster didn't seem to actually click, so I imagined 8 clicks/turn) and my best group was 3/4". 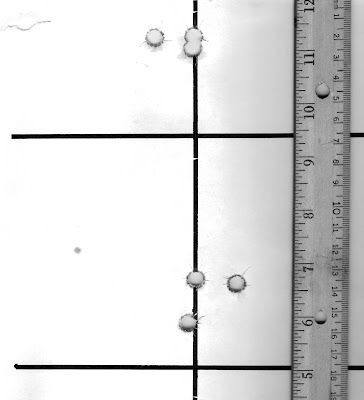 I tried it at 100 yards, which was very optimistic of me, given my rather dubious eyesight. Note to self; If you think you're going to shoot very well at 100 yards with this, get some glass. Either that or a very long white cane. Still, I believe the 3" groups are quite do-able, and I had no trouble hitting a 3" x 5" gas cylinder cap, first try at that distance. Coyotes at 150 yds? I don't see why not. Should be easy. A 4X scout scope is an option. I wish I had had one.

Ammo was Federal JFP from Wally World, and worked flawlessly. It featured 180 gr bullets, and was advertised as delivering 985 fps, presumably from a full-sized conventional pistol. From the Hi Point, I was getting 1100-1120 fps. Other ammo for comparison was some 150 gr reloads which were delivering 910 - 960 fps from a compact pistol, and were hitting 1100-1150 from the carbine.

Three other people tried the gun, and described it as comfortable, easy to shoot, and having a "sporty" recoil. This assessment is because the basis for comparison is a .40 cal pistol with muzzle velocities in the mid 900s. Recoil is certainly there, but is easily manageable, slightly less than a .223. For the frail types, there's a muzzle brake / flash hider available.

The basic gun runs $305, at least where I got mine, and magazines run $18-20. Hi Point pistol mags fit the carbine, and are available in 8 or 10 round capacities, depending on your location.

Edited to add the pic. I had a nice pic from the range, but the computer ate it. Honest

Addendum: I have several more posts about the 4095 on this blog. Enter 4095 into the search block at the top left corner of the page.
Posted by Billll at 3:37 PM

Pictures or it didn't happen :)

The 100 yd shots were incredibly frustrating. The target was a fuzzy dot, and the front sight was a fuzzy post. I definitely need either the 4x scope or some kind of better glasses.

I hit 16in steel plate at 500m using iron sights on an AR15 last Sunday at the Appleseed event.

So where were you when it was time to do the long-range shots? :-)

Better glasses? Definitely. Or at least something more appropriate to the rifle. The ones I had work well with a pistol at 25 yards, not so good further out.