A lady friend of mine whom I have often taken to the range, has just bought herself a gun. I did not pressure her to buy this one over that one, but rather let her shoot everything I owned, and anything I could talk my friends into letting her shoot. I emphasized that if she bought one for herself, it should, first and foremost, “fit” her. That is the piece should come to point in her grip reasonably close to what she’s aiming at so as to minimize the final tweaking of the sight picture.

She wanted something in a major caliber, that is 9mm or larger that was low maintenance as far as learning the fiddly details like cleaning and correcting malfunctions, at a modest price. She found a 4” Ruger Security six in .357. 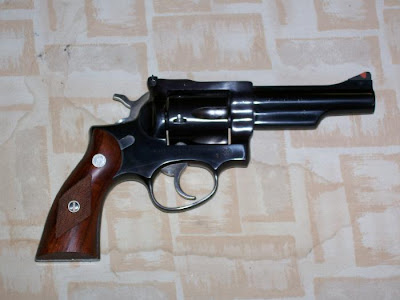 She likes the part of practicing with relatively cheap .38 special ammo, and having the option of the .357s power should the occasion call for it. Think bowling pins.

Having bought the gun, she’s looking at it in much greater detail than she did with the loaners she used before, and is developing a variation of the soldiers attitude toward it. “This is my rifle. There are others like it, but this one is mine, and I’m going to love it and hug it and squeeze it until its eyeballs pop out.”

Now comes the fun part: accessorizing. The gun came in its original cardboard box. No accessories. So what is needed, and in what order? Here’s my list:

1)Ear Muffs. Electronic ones can be had at Harbor Freight for about $20. Non-electronic ones work better.
2) Cleaning kit. These can be had low buck from the big box stores complete with solvent and oil. If the solvent is missing, there’s Butches Bore Shine, although I’m sure everybody out there has a different favorite.
3)Holster. This is not particularly a CCW gun, but could be. My suggestion would be an OWB rig in leather, with a retention strap. Something that stays open when the gun is out so the gun goes back in one handed.
4)Speed loaders. 2 each, in a belt-mounted holder.
5)Carry Case. The soft ones are relatively cheap. It needs to hold the gun and speed loaders at a minimum. A small range bag might be the ticket here. For that matter, a small gym bag might work just about as well and doesn’t scream GUN if you wind up carrying it about in public.

That should cover the basics. Anything important I forgot?
Posted by Billll at 7:42 PM

Skateboard tape for the front and back of the grip.

Or some nice wood grips.

Or just leave them the way they are.

May I suggest along with the speed loaders a couple of TUFF speed strip loaders? They are much more comfy to carry in a pocket than a cylindrical speed loader.

Mine came with the Hogue monogrips and I hated them. Replaced them with Pachmayr Signature grips. Much nicer.

A beaut. Found my own stainless Speed Six a while back and am growing attached in the same way.

When my Dad started really running his Security Six, as opposed to bulls eye paper punching, he ordered everything on your list from Midway. Their small range bag is a great item, especially for the price. The Safariland 568 holster was reasonably priced and works well. Finally, the HKS double speedloader pouch at $15 works fine.

I prefer standard muffs to cheap electronics. Though I've yet to find muffs that don't dig my eye protection into the side of my head after 30 minutes.

Excellent choice. My first centerfire handgun was a stainless Security Six at age 16. Promptly put a set of Pachmayr Signatures on it. Was my favorite revolver until my younger brother killed a doe muley with it at 197 yards, two rounds an inch and a half apart, while she was running! I felt he had earned the gun, and gave it to him. He was 17 at the time. He still has it, and with the passing of time, I hate him for that!

Ear plugs - in addition to the electronic muffs. Much perceived recoil is noise. Better quality muffs are nice if you spend a lot of time at the range, because you get stereo directional cues, and since you can leave them on and talk, your hearing is better protected.

Shoulder holster is easier to conceal under a jacket in cold weather, and easier to access, and less of a dropping hazard in the bathroom.

I like the idea of a gym bag to carry it and all the accouterments. With a little forethought, a tennis style bag gives you a discrete way to carry and have quick access to the gun. Not only does it not scream "gun", but who is going to want to steal a bunch of stinky gym clothes?

A hard case with a padlock, or a safe to store it in if there are kids around.

Don't make a habit of exclusively shooting 38's out of it - you can build up a ring of lead in the cylinder that will prevent you from chambering 357 loads, and that ring is a pain to clean out. I had to use a tornado brush and lots of effort.