While the Brady Bunch is blathering that the gun culture is in a serious decline, it seems that Wal-Mart is adding more guns and ammo to their stores. Wally world doesn't put out merchandise that won't move folks, this is about as capitalist an organization as you can find.

Consulting with the FBI, one finds: 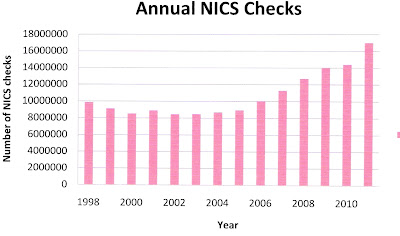 Now there are some caveats that go with this chart. As the FBI states, a NICS check does not equate to a gun sale, so actual sales will be less than the number of NICS checks. That said, the curve of the graph is a valid indicator of the trend in gun sales.

The number for 2011 is a projection based on the first quarter data only. The actual number will change as the year goes on, but not by a huge amount.

When you see a t-shirt at the gun show that says "Ammo: The new currency." You have to wonder if the misguided economic policies of the administration are actually having the unintended consequence of driving sales upward over and above their known hostility to guns in general.

If these sales are to people who already own guns, then increased sales does not necessarily equate to a growing gun culture.

99% of every gun owner I know owns more than one, and 99% of those people go shooting maybe once a year.

And as I've pointed out in the comments section here, the gun culture is not going to survive if we insist on making shooting as inconvenient and unattractive as possible -- which the gun culture excels at.

But let's keep deluding ourselves, because we're really good at it.

I predict that within a generation, demographics, economics, and geography will decimate the gun culture beyond recognition, even if there are still 100 trillion gun "owners." Brady, Schumer, Feinstein, etc., don't need to do anything, since we're letting ourselves die.

But doing something other than villifying the anti-gun boogeymen doesn't sell NRA and RMGO memberships, and requires some thoughtful introspection and soul-searching that we seriously lack.