In Search Of Accuracy 4

While looking for areas in which improvements can be easily made to improve the accuracy of my Hi Point 4095, I discovered that the sear assembly looked a bit skewed. 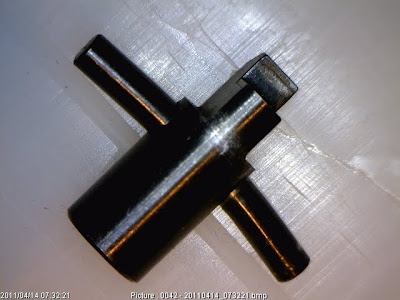 The pin running through the sear body is about .098" in diameter, and is visibly bent downward on both sides. I asked, and was told this was not on purpose. The trigger operates the sear by pulling the assembly down (down and left in the picture) to release the firing pin. The trigger movement, to this point was long, heavy, and rough with firing pin release happening eventually, but not too predictably. Trigger pull was running 12-16 lb on my Department of Bass fish scale.

Once straightened, the pin drops out, and is easily replaced with a hardened metric dowel pin, M2.5 x 19mm. Trigger pull is now a consistent 10 lb, which I think is a bit high, but is probably good for what is essentially a truck gun. Trigger action is now very crisp with no creep at all.

Did it help? Well yes. Previously I was getting 4MOA groups only with 180 gr bullets, and huge groups with my 155 gr reloads. Last trip out to the range, in winds strong enough to cause me, the table, and the sandbagged gun to wobble, best group was: 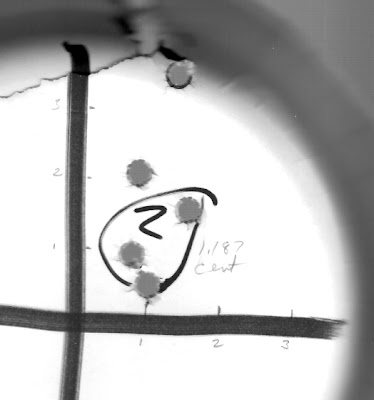 This looks like the groupings are going the wrong way, as I had 4MOA before, and this looks like 4.5MOA but considering that this ammo was handing me groups that would barely stay on a 10" pie plate at this distance before, I'd say there was a marked improvement. I have some 180 gr ammo now to test with, hopefully on a warm day with less wind.
Posted by Billll at 12:14 PM