Here's a couple of maps that I find interesting. The first 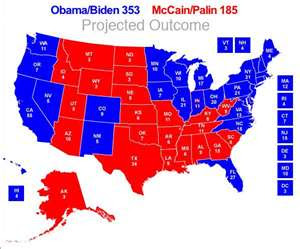 shows the voting patterns in the '08 election.

The second, thanks to the WSJ, (subscription may be required) 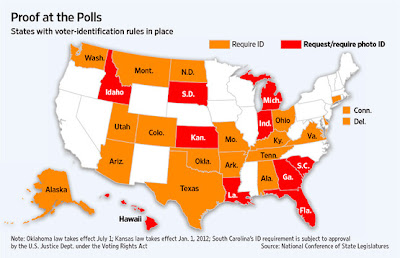 shows the states that require or ask for some form of ID before letting you vote. Correlation between the Blue states in the first map, and the white ones in the second isn't perfect, but is strikingly close. Some of the state shown in yellow here have instituted this requirement only recently.

Who knows, maybe the Dems protests that requiring I.D. to vote suppresses voter turnout may be true. The obvious solution is to set up more voter registration booths along the southern border and at every graveyard, although it may raise eyebrows outside of Arkansas at how alike so many democrats look.
Posted by Billll at 11:58 AM

Make the requirements to vote the same as to own a gun.

Simply go to the polling place, fill out a Form 4473, show your ID, and the poll worker will check with the FBI database to make sure that you're not prohibited from voting. If everything is working correctly, you will be allowed to vote in a few minutes.

If the GCA/Brady system doesn't violate the rights of gun owners, then what possible objection could there be to implementing the same system for voting?

O.K. something's going on with Blogger which identified the last 2 comments to arrive here as spam.

Anyway, if voting were treated like gun buying, you'd have to have permission from the local county sheriff and chief of police before being allowed to begin filling out the other forms. This might keep ballots out of the wrong hands, but it would also cut in to the constituent base in the blue states that practice this sort of thing.