Self Defense For Women In India

An Indian gun maker has introduced a revolver specifically intended for women to help reduce a rape epidemic. 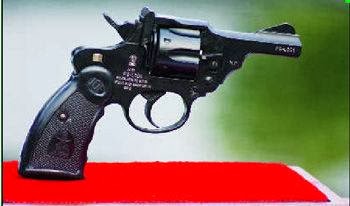 This little baby is a .32 cal knockoff of an old Webly top-break. I don't doubt it will work as advertised if you don't mind rather anemic performance. It's sort of a .380 -P-. On the good side, it's at least partly Titanium to keep the weight down, and it's NOT pink.

On the bad side, it's priced at around $2000 in a country with a nominal per capita income of $1219 which suggests that you better be well heeled to think about adding one to the wardrobe. The manufacturer claims to have sold some 20 of them already in a country with a population of 1 billion.