Today there was supposed to be a gun rights rally in every state capitol. One was held here in Denver on an otherwise fine 57 deg day. Here's a panorama of the crowd:

Sorry, I don't have one of those fancy cameras that takes breathtaking panoramas and by the way doubles as a phone in its spare time. Speakers included aspiring governors, senators, and local legislators. One of the aspiring governors was a Libertarian Party candidate without whose party's help the Dems would not have been controlling the Senate in the first place.

Ran into several old friends there from the Appleseed events and the Hudak recall effort so it was like a form of class reunion.

Attendance was rather sparse I'm afraid. This unfortunate circumstance was blamed on outside influences. 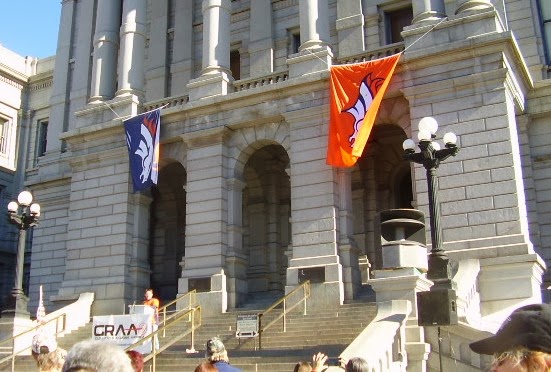 I'm told there was a football game or something going on.  Likely story. More people should have been there as we cut the festivities a bit short in order to get everyone into a local bar with a TV in time for the kickoff. I have to say though that traffic on the way home was impressively light.