Haven't had anything here in a while, and frankly, I'm disappointed in that. Building something socially irresponsible and calling it performance art is a lot more fun than ranting and raving over the actions of the nitwits we've elected.

Anyway, here's some previews of coming attractions. First, one of my friends informed me that someone at his work was trying to get rid of an electric scooter of indeterminate providence, by parking it out by the company dumpster and hoping someone would steal it. Being nothing, if not helpful, I volunteered to steal it. 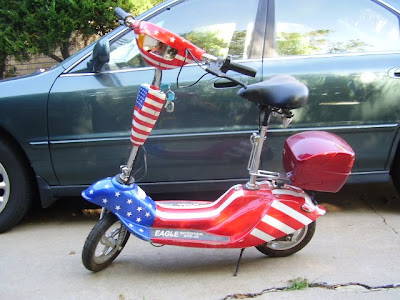 The batteries are about 2 or 3 years old, and I would not want to have to depend on this to get me 12 miles to the well before Timmy expires while awaiting rescue, but a couple of alternative uses for this suggest themselves. Some are more outrageous than others, and the outrageousness factor is weighted heavily when planning projects.
This, for example: 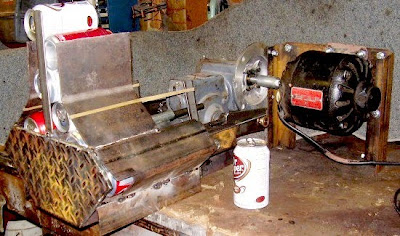 This is a device to automate the otherwise difficult and tedious task of crushing pop cans. It has features such as a 1/3 hp electric motor, 2 pistons to crush the cans, and a double-stack magazine to feed the cans in. Crushed cans, in the form of neatly uniform aluminum pellets, drop from the openings on either side, at the front, into whatever receptacle the operator has provided. The arms with the rubber bands around them are connected to a second set of pistons that hold the next can in place until the crusher piston has fully retracted. It seems that getting lightweight pop cans to feed properly is a bit trickier than you'd think. I will try to get a video of this soon.

Thematic paint and decoration are being considered.
Posted by Billll at 8:01 AM