Fighting robots were first introduced in Denver in about 1986 at the local science fiction convention. The event was a smash hit, and is still put on today. The rules are fairly simple, and it's possible to build a competitive machine for $50 or so.

Others have gotten on board with events like Robowars and Battlebots, but the best thing to happen to the concept was when the military got into it. Today, the best toys are at DARPAs annual contests for the really serious end of things. 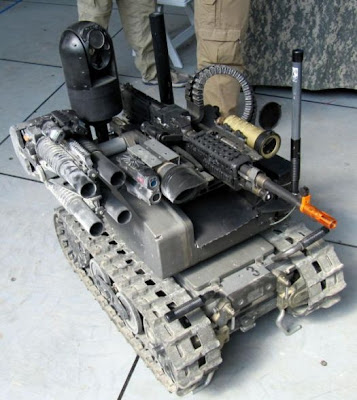 This baby looks to weigh 1-200 lbs, and has all the tactical bolt-ons any red-bloded American boy could want. The Critter Crunch, mentioned first, has 2 weight classes, 2 and 20 lbs. They also have an informal heavyweight class, which no one has built a machine for that requires your robot to fir into a 1-meter cube at the start, and top out at 100Kg max weight.

After seeing the 20 pounders go at each other with flame throwers and axes, a little thought makes clear that the larger class would necessarily be something the Army would be proud to own. It's also clear that the battle will have to be fought outdoors, and the audience will need to watch by remote TV. Backup cameras wouldn't be a bad idea either.
Posted by Billll at 1:20 PM