Here's a replica of a piece of firearms history, one of the earlier attempts to build a multi-shot pistol. This one is a replica of an Ethan Allan .36 cal pepperbox, circa 1830. Everything Mark Twain said about pepperboxes holds true, and more.

The one Mr. Twain commented on was a more advanced model, with 6 barrels which rotated when you pulled the trigger. 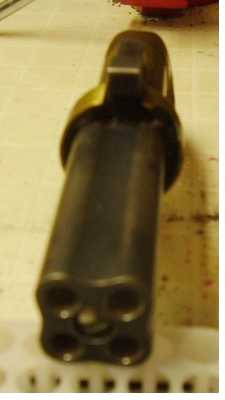 Sorry about the fuzzy image, but this one has 4 barrels, and must be indexed by hand before firing the next shot. Caliber is .36, which turns out to be .357. More on that in the next post.
Twains remarks as follows:

George Bemis . . . wore in his belt an old original "Allen" revolver, such as irreverent people called a "pepper-box." Simply drawing the trigger back, cocked and fired the pistol. As the trigger came back, the hammer would begin to rise and the barrel to turn over, and presently down would drop the hammer, and away would speed the ball. To aim along the turning barrel and hit the thing aimed at was a feat which was probably never done with an "Allen" in the world. But George's was a reliable weapon, nevertheless, because, as one of the stage-drivers afterward said, "If she didn't get what she went after, she would fetch something else." And so she did. She went after a deuce of spades nailed against a tree, once, and fetched a mule standing about thirty yards to the left of it. Bemis did not want the mule; but the owner came out with a double-barreled shotgun and persuaded him to buy it, anyhow. It was a cheerful weapon--the "Allen." Sometimes all its six barrels would go off at once, and then there was no safe place in all the region round about, but behind it.

Sounds exciting, if possibly expensive. Mine is so poorly designed, ergonomically that a conventional grip 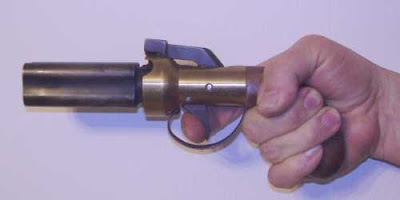 Causes the barrel to rise about 30-40 degrees when you pull the trigger. Even at close range this will result in a hole in the bad guys hat, and an even more pissed-off bad guy. The trigger works best if you hold it at about waist lever, or just under the poker table, 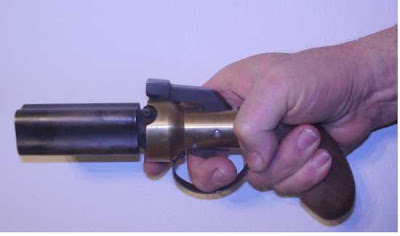 Place the barrel against the underside of the poker table, and use the middle finger to pull the trigger more up than back.

I got this as an unfinished kit. Got it cleaned up and finished out, then tried it with a very light load and some quickie plastic bullets. Load was 8 gr of 3f under a fabricated Teflon bullet about 3/8 in long with a pointy nose. Not very scientific, but hey, watch the results. Our first target was an empty cardboard box, 14 x 14, with one top flap up, so overall target is 14 wide x 21 high.

1st shot, me shooting at about 5 feet. Shot from hip using poker table grip. I hit box in the upper LH corner of the flap. I Felt disappointed in distance from center of box (aim point).

2nd shot: Partner tries gun. Same box, same distance. He uses the more conventional grip, and misses the box completely. He tells me to let a 3rd partner in crime try the last one.

3rd shot: PIC #3 takes conventional stance in his back yard, aims at the center of the narrow side of a small barn at about 15 feet. Success, sort of. He hits barn about 8 in below the 15 foot high eave. The bullet bounces off the side of the barn, hits the eave, bounces off the eave, hits a chair in back yard about 10 ft in front of us, bounces off the chair, hits a motorcycle about 5 ft to my right, bounces off the motorcycle, and comes to rest in thicket of vines.

Please observe all safety precautions, such as safety glasses. We did.

Everything Mr. Twain said about the Pepperbox is confirmed. I feel like Deadeye Dick for hitting the box at all.

The thing is a hoot at the range, loaded up with a proper dose of 3f powder and a .36 cal ball. I let other people shoot is, and enjoy the look of puzzlement on their faces when they miss the human silhouette target at 5 feet. The barrel is so heavy that recoil is negligible. 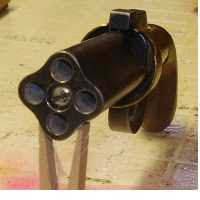 This is the ready-to-fire orientation of the barrel. The others, I guess, would be the safe position that doesn't leave the hammer sitting directly on a percussion cap.
Posted by Billll at 6:24 PM

Fascinating stuff, Bill. I particularly like how you discuss the best way to get some sort of accuracy out of the pistol.

I like to look at stuff like this as a piece of engineering history, when new technology arrived, and people were trying to figure out how to use it.
At the same time, the end users got to take this wizbang new stuff and actually figure out how to make it work, not always as the manufacturer had in mind.

how ya doin bill, my name is daniel. i have one of these pistols and am tryin to figure out if it is authentic or not. this gun has been passed down so if it is a replica it has to be an old one. all i can see as far as markings is a 4 digit # by the trigger. it's an heirloom so i'm really interested and this is the first time i have seen the exact gun so any info you have would be greatly appreciated. from southwest louisiana, thanx, daniel

Daniel:
The number under the trigger is in the form of xxxx P with the letters CMC under it, then the gun is a replica.

Mine has an additional line "patent pending".

The gun kits were sold in the 70's and possibly earlier.

Go here
http://www.gunbroker.com/Auction/ViewItem.aspx?Item=166888342
and see if your gun looks just like the one in the pictures, including serial number location.

hello thanks for the site but thats not my gun is there a place i can send you a pic of it mine looks alot older than that gun my number is close to that area but i would like some one to look at it thanks for your time again ....Scott

Send me a picture to bllew at rmi dot net, and I'll give it a look. Maybe post it if it's odd enough.

Hello Billll! I was wondering if you could tell me an estimate to what this gun is worth. Based on earlier posts I have figured out that what I have is in fact not a replica. I have looked around and your post is the only one that I have been able to find that is just about identical. Any information that you could tell me about the value would be greatly appreciated. Thank you very much.

I've never seen a real one of these so without better evidence I'm guessing yours is a replica too. either Dixie Gun Works or CMC manufacturing. As a kit they could be had in the 60's or 70's for $30-$40. Today, in finished form it's anyone's guess but I wouldn't think they would bring over $$1-200.

If there's a black powder specialty shop near you they might be able to give a better estimate.

Hi, i have an identical (well, almost: barrel contour is different) that i bought as a kit in the mid 90's. I didn't like the grip either so i made a walnut saw-handle grip for it. This improved the feel tremendously! I can actually hit a man sized target at something approaching 6 or 7 paces. :^)

Almost anything you do to it would improve the ergonomics. The real question would be: Does it still fit in your boot? :-)

I have an original with just the five digit code nothing else I'd like to take a look at it and get back to me if possible. Very curious on what it's worth and what the market is like for them today

Gun makers didn't start numbering their guns until fairly late as it wasn't required. If yours has a number, it's probably a Dixie or CMC gun. I am not an authority on the things and have no way to easily authenticate them. Check around your area and see if there's a black powder specialty shop not too far away. Also at a local gun show, someone selling older cowboy guns might well have one of the catalogs of gun values and would be able to ID it.