The anti-gun group, Mayors Against Illegal Guns, has issued a press release following the Pittsburgh shootings of 3 cops. The group is the creation of Mayor Bloomberg of New York in an attempt to impose New York style gun laws on the whole country. It has been cited as breaking the law through straw purchases at out-of-state gun shops, then suing the shops to try to put them out of business.

A mass shooting, defined by USA Today as producing 4 or more bodies, creates enough blood for the antis to dance in for some weeks following. Frequently this only lasts until it becomes painfully obvious that no gun law ever proposed would have actually had any effect at all on the outcome of the tragedy.
Note this chart, which I got from a USA Today article: 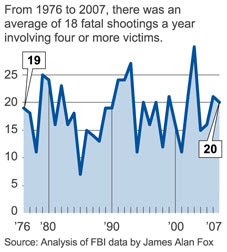 On average, we get 18 mass killings a year, with an average of 5.3 dead per incident. There's one in every crowd, and when the crowd gets big enough, there's more than one. That's life. Be Prepared.

Mass killings happen more often in bad economic times than in good. Based on this, I'd say the way to reduce mass killings would be to massively cut taxes, but what do I know.

Anyway, the point of all this is to point out that in Colorado, there is only one mayor who belongs to Bloombergs hoplophobe and knitting society, and that's Denver Mayor John Hickenlooper.
Rumor has it that he's considering moving across the street to the governors office. Now might be the time to get in touch with him and suggest that his chances would improve if he drops his association with Bloombergs anti-civil rights clan.
Posted by Billll at 6:42 AM