The Future Of Transportation

I have seen the future, and it comes from south-east Asia, circa 1970. It appears that the 3-wheeled mini-van that I saw in Viet-Nam in '69 will soon be imported to the US for your motoring enjoyment. 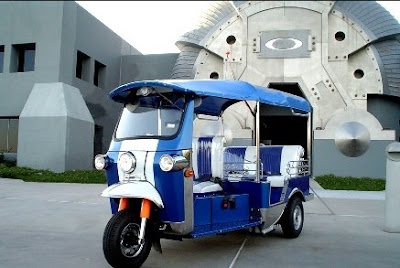 The TukTuk, from Thailand.

Actually these things have been here for a while, sold by Lamberetta, and mostly used as runabouts in factories, and sometimes on golf courses, but back then, they used 2-stroke motors which could put out an unacceptable cloud of blue smoke. In S.E. Aisa, they got used for everything as they could navigate the narrow streets, and sometimes seemed to have an unlimited carrying capacity. 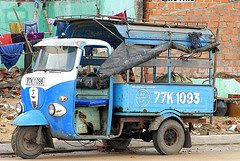 Lambretta 3-wheeler. Imagine 2 bench seats in the back, facing each other. Now imagine that this is your taxi, in downtown Denver, at rush hour, with no traffic lights. Just like Saigon in 1970.

Today, thanks to modern technology, and the Tata motor companys ability to build such things from essentially nothing, the TukTuk will be hitting the roads soon in configurations to replace almost everything from sports cars to garbage trucks.

The Tuk Tuk will come in many different styles, ranging from a three-passenger model up to the 12-passenger hauler. In addition to the passenger vehicles, there's a pick-up truck, dump truck, garbage truck (!), flatbed, van and even a bare chassis for DIY projects, with prices starting at just under $10,000.

Now approved by both the DOT and the EPA, these things will soon become the SUVs, taxis, and pickups of the future. My take on the passenger-carrying capability of these things is tempered by my own experience with these things, noting that they could be fitted with 2 bench seats facing each other in the enclosed rear that would seat 4 GIs or 15 Vietnamese.
Posted by Billll at 9:02 AM

Maybe it's time to revive Cushman.

Cushman, a division of Textron, seems to be doing fine.

They are specializing in non-roadworthy vehicles, for which there is a substantial market. The trick is to fit the vehicle with DOT highway tires, and limit yourself to 3 wheels, which makes your machine a motorcycle, and exempt from the most onerous federal mandates, while getting you onto the roads.

I can't find the site of vintage Cushman (non-scooter) vehicles I ran across a few weeks ago, but other than labor prices of building them in the U.S., no reason some of those couldn't be fitted with DOT tires, updated engines and brakes, and fill the same niche.

I still think a small-engine tadpole config would be a fun runabout vehicle.

Some of the Cushmans look like they may already be there. I know that several Police departments used to use them for the meter maids. When I was at Grand Canyon, the park ranger showed up in a Lamberetta-like machine that turned out to be carrying a Harley logo.

Meanwhile, the H-M Vehicles Freeway
http://www.3wheelers.com/freeway.html
looks like a fairly promising layout in the 2-in-front configuration. The local Yamaha agency had one briefly as a parts runner.
I think I did a post at some point on this topic.