This cartoon recently appeared in the Miami Herald, where Jim Morin is upset that some congressmen are, in effect, being bought. 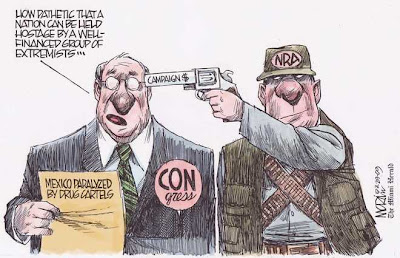 Let me explain something to Mr. Morin. All congressmen are bought. Top to bottom, left to right. If you show a congressman that your cause it right and just, and will donate several million to his re-election campaign, then you'll have his vote, at least once. Holding money to a congressman's head is the socially acceptable way of getting his attention. Per the constitution, using the gun in its intended fashion on elected officials is supposed to be only a last resort.

In that light, I'd like to nominate Mr. Morain for the Gaia-Journalism award for Journalistic recyclability. Taking the same image, and dressing the man with the gun in a dark suit and shirt, with a white tie with a union tietack, the cartoon is usable the next week as well. Dressing him up in an ordinary suit and changing the tietack weekly, going down the list of K-street lobbyinsts, the thing should get Mr Morin paid for the rest of the year. All else that would be necessary is to be sure the "evil" lobbyist comes from the "right" side of the fence, so to speak.
Posted by Billll at 4:17 PM