OK, truth in advertising, these are 2-1/2 bores taking shape here.

Got started on the 2-1/2 bore plinkers today. Here is a picture of the barrels I’m starting with. 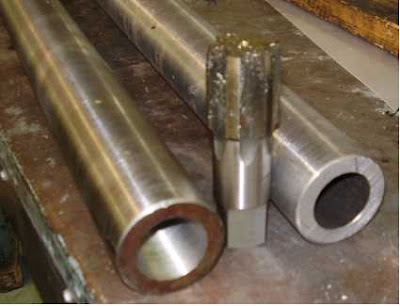 The material is not known for sure, but is no worse than 1020 mild steel. The properties are:

Stress on the barrel in use is limited to Pr/t where P is the pressure in PSI, R is the radius to the middle of the wall, and t is the thickness of the barrel. Since the absolute limit, at which one would see bulging of the barrel is 50800 psi, we want to stay well below that, but at maximum, the pressure would be 50800 x t/r where t = .375”, and r = .813. This gives 23,431 psi, which is equivalent to a .357 +P or something. Normally one tries to leave a generous margin, say 100% on things like this, so let’s say that pressure should be limited to 23,431/2 = 11,715 PSI, which is consistent with old black powder pistols. Since this is to be a black powder gun, this is encouraging.

How much is the pressure going to drop? Don’t know, and probably no good way to calculate it, but if I get half that velocity, I’ll be quite happy, and probably severely bruised on the shoulder.

Here are the barrels with one plug screwed all the way in, and the other partially out. The thread is 1-5/16 – 18 UNEF. The handy part of that is that the extra fine thread gives the best strength, and the drill size for that is 1-1/4”. 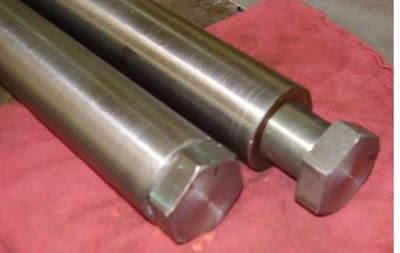 The plugs will be drilled for the nipple, and to attach the stock and the lock.
That UNEF threading is hard to see.

One other thing I promised is the answer to the nagging question of Why do we shoot those odd sized bullets we like so much?

Way back when, all firearms were smooth bore, and the bore size was the number of balls one could make for the gun, from 1 lb of lead. Hence the Brown Bess of the American revolution was a 12 ga, .730 diameter. Until micrometers became common, it was easier to measure in the number of balls per pound than in actual inches, hence:

As powder got better and more predictable, bullet size dropped. Brass cartridges made the long ramrod obsolete, allowing even smaller bullets. Not all of these became popular, by any means, but notice the 50 ga and the 100 ga. There’s the .45 and .36 caliber as in Army and Navy Colts. The 16, 20, and 28 ga eventually became rifles used in and around the Civil war, and the 12 ga smooth bore is still with us today.