This just in from Accurate Shooter.com:
After all those years of playing golf, the Armys brass tried dimpling the other item the Army sends whizzing through the air...bullets.

Turns out the dimples work as well on bullets as they do on the fairways.

The dimpled “golf-ball” design was considered a “long shot” according to the design team, but it has performed beyond all expectations. The nominal drag coefficient (Cd) has improved by about +.040, while cartridge muzzle velocity has increased by nearly 80+ fps because the bullet’s dimpled skin reduces in-barrel friction. What’s more — the terminal performance of the dimpled bullet has been “spectacular”. The Aberdeen team set out to produce a slightly more slippery bullet for U.S. Army snipers. What they ended up with is a bullet with dramatically enhanced long-range ballistics and superior killing power on “soft targets”.

“Most FMJ bullets break along the cannelure and then fragment into two or three large pieces. With the dimpled bullets, you have multiple fragmentation points so the bullet literally blows up like a grenade in the target.”

Sounds like something just made for varmint shooters. Oh yeah, and note the publication date.

I suppose I could have told them this myself, as I've been shooting dimpled projectiles for years: 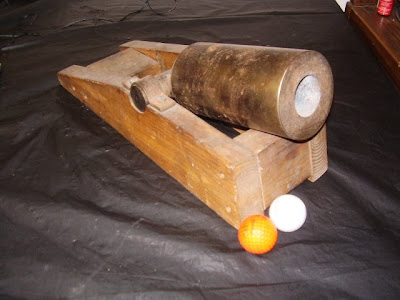 This little baby can get you onto any green at the course, in one....from the clubhouse. The golf balls are so light that 3f powder is probably the best pick, and loads up to 500g have been used. The balls are, to my observation, nearly indestructible, although you will want to spend some time at the ball washer afterword. Range is uncertain, as we have never successfully located a ball fired at an elevation greater than 10 degrees. It currently holds down the floor in front of the fireplace, and has for some time. It looks like I need to clean it up and take it out for some exercise.
Posted by Billll at 6:37 PM