Oboe is proposing some rather draconian changes to the CAFE standards for fleet fuel economy. In keeping with the administration of floundering sarcastically instead of doing anything useful, it appears that while it is true that it will accomplish next to nothing, it is also true that it will cost more American lives than the war in Iraq.

The first link is to Keith Hennesy, who presents the sort of discussion that perhaps only an engineer could love. It's for sure the greenies won't like it much.

The comparison is between the Bush proposal, from near the end of his term, to the Obama proposal for higher mileage, and more dangerous cars.

For my part, I don't see either on of these plans doing anything to really justify the cost. 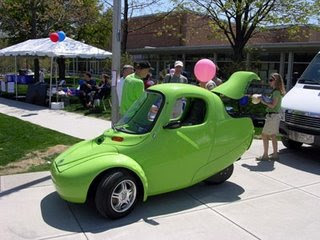 NOTE: This thing is a Corbin Sparrow electric vehicle made near San Jose CA. It never did sell very well, and eventually was sold to Meyers Motors, and then faded out. One was available at the battery plant where I worked, but before my time there. My co-workers who got a chance to drive it described it as "scary" notably if the speed limit was over 40 mph. I liked the platform and thought it would be fun with enough power, and sure enough, the thing has been produced with the batteries removed, and replaced with a 1000cc Harley Davidson engine, which reputedly gives this little go-kart a top speed of 130 mph. Probably gets 50 mpg, too.
Posted by Billll at 6:53 PM

You need one of these eco-mobiles.

Somebody built something like that here. The name began with A, and it was made from a 250 Honda with a full shell and fixed outriggers. The outriggers were fairly high, so that normal gentle cornering wouldn't touch them to the ground.

Just thinking about hard cornering made me start flagging down the ambulance.

I tried pretty hard to buy one of those a few years ago. I moved closer to work (37 mile one way commute down to 1 1/2 mile one way) and had plans to fix all it's power short comings. Couldn't find one at a reasonable price tho.

My experience also. The folks who bought those things continue to have a high opinion of them, even when they decide to get rid of them.