Found at WizbangBlue, here's the future of the US auto industry, or at least part of it. This early prototype, designed by the Germans, and based on an Italian moped, will be produced by the American Mafia (UAW). 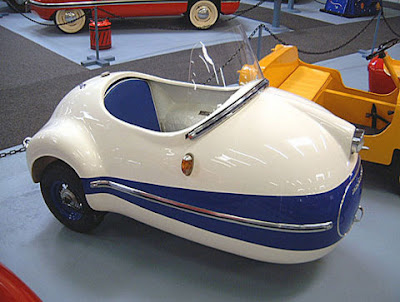 Running on 100% US produced corn based ethanol, and with an improved top speed of 35 mph, the 2010 Chrysler "Le Paisan" will replace the bourgeois Le Baron, and become required for purchase by all Americans not in possession of a valid membership card in a state-approved labor union.

Options including a top, and a heater / defroster will become available as soon as a method of extracting a usable amount of heat from the 49cc motor is developed. In the interim, owners are advised to dress appropriately for the local climate, which is expected to change.

The export version, to be sold in England, will be called the "Brown" after the one-eyed Scotsman who is currently impoverishing the country. Operators there will be required to operate the steering controls with the left hand.
Posted by Billll at 8:16 AM