Mounted a set of leather bags. Nice bags. You'd think this would be an easy job. You'd be wrong. Turned into a 15 step process involving relocating the turn signals and fabricating some support structures. Came out nice though: 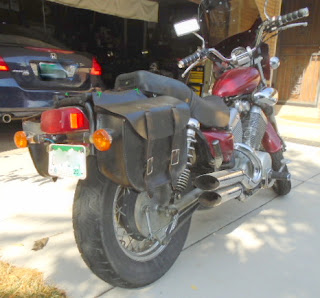 One other thing I've found is that carburetor cholesterol* can be treated with judicious application of Mineral spirits at a rate of about 80:1 in the gasoline. A 35mm film can of the stuff in 2.3 gallons of gas seems to work a treat.  Slowly but surely, the bike is running better and better with the last tank of gas getting me just over 50 mpg.

Next up will be dealing with handlebar vibration.

*Buildup of glop in the carb as old gas evaporates. The issue here is quite like the same problem in people with treating cholesterol with a drug to dissolve it and getting chunks of now free-floating stuff causing clots which then cause strokes. In the bike this freed up some amber-colored sludge in the aft carb which got under the float needle and caused uncontrolled peeing of gasoline down over a hot engine.
Posted by Billll at 7:15 PM