Questions About The Norks

Li'l Fat Kim has just tested a missile roughly equivalent to a Titan II only with a mobile launcher similar to, but much bigger than the one proposed for our Midgetman ICBM. Having worked on this sort of stuff myself, I can assure you that the design and building of them is non trivial and quite expensive. Seeing all this technological advancement from a country that is probably the economic equivalent of Detroit makes me wonder.

The story on the launchers is that they were provided to the Norks by the Chinese (surprise, surprise) ostensibly to be used to transport logs with their timbering industry. Nice story. The launchers are big, heavy, and relatively inflexible thus requiring some pretty good roads to operate on. Yes, they can run on dirt roads, but the dirt needs to be deep hard packed gravel and not the sort of thing that turns to mud every spring, and winds tightly up the sides of mountains.

The Norks have also had a great run of good luck with the missiles in test with only a few failures before running like they had been extensively tested already, like in China for example. 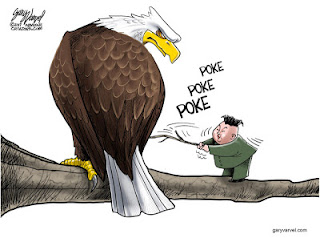 Found this pic at Theo Spark. I'm thinking that it's missing the hand of Chinese God-King* Xi stuck up Kims butt. Also Chinese missile and troop movements to the North of China and along the NK border make it look like Xi is trying to goad Trump into attacking Kim so the Chinese can intervene on behalf of their brothers like they did the last time. It would be unlike the Chinese to toss a useful ally/stooge like Kim summarily under the bus although for the right price...

There are currently 3 U.S. Carrier groups hovering around N.K. In the event of hostilities, I would be trivially easy for Kim to launch 3 of his smaller missiles in a nuclear ballistic attack against them. To the best of my knowledge, the carriers have only limited defenses against such an attack although the missile frigates accompanying them might well surprise us. With the "unfortunate loss" of the carriers, the Chinese buildup in the South China Sea goes on pretty much unchallenged and the Norks take the fall.

Or maybe my blood sugar is a bit low this morning.

UPDATE: Others have noticed as well.

*It is an Emperors prerogative of course to call himself anything he wants. The Chinese have already published a New Revised Koran and made possession of old ones illegal. Additionally the Chinese Government has taken it upon itself to appoint the senior leadership of the Catholic Church in China, and is encouraging all Christians to replace aging images of Jesus with similar images of Xi.