The humane society in San Fran is located in a somewhat seedy part of town and has a problem with excessive numbers of street people harassing potential animal adopters. So they hired a security guard to shoo the beggars away. Provided by Knightscope, the 400 lb robot patrols the storefront of the establishment and encourages the bums to move along.

Seems it's not very imposing as the bums have smeared it with barbecue sauce and feces and tipped it over in protest. Even the city has gotten into the act, apparently seeing the bums as more reliable voters than the employees at the shelter, and threatened the shelter with draconian fines unless they remove the robot immediately.

Rolling out my l33t engineering skills, I propose a solution:
1. Paint the robot black.
2. Equip the robot with some sort of unpleasant but non-lethal armament, say a cattle prod.
3. Have the robot approach non moving human forms and inform them that they need to either move on,  pay the robot, cash or credit, a minimum of $1, or be moved by application of the prod.

Anyone paying the robot will have his or her face recorded in the bots memory, and will be left alone for the next 2 encounters. Yes, the bums will squeal to the city council, who will send threatening letters to the shelter who can then respond that the council is anti black, anti animal, and oppressive to the culture of the criminal community. I'm sure there are other accusations that can be ginned up. This should work, and the accusations can be rolled out anew for the next council election.

Note to Knightscope: Your machines command respect in proportion to the amount of coercion they can inflict. 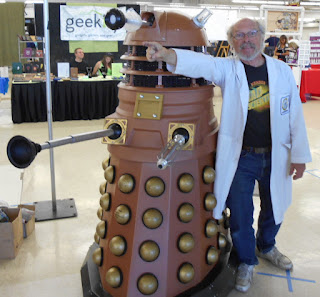 Where is the Terminator when you need him?

The model pictured should do the job, striking terror into the hearts of the mendicants and with the paid face recognition software, it will provide hours of entertainment for the legitimate customers. Your $1 donation to the Dalek will be credited to your adoption fees of course.