Gun sales in November were still a bit lower than November of last year suggesting that the prospect of President Clinton strikes more fear into the hearts of Americans than the possibility of any serious crime or terrorist attack. 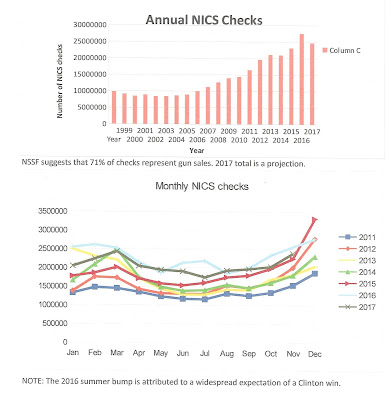 A "Trump effect" may boost gun sales in December as early reduced demand results in lower prices, and increased employment results in more disposable income. Whatever. 2017 gun sales have topped 2016 only twice, and both times by only 3.7%. For only being a factor in one year, you have to think that Hillary is probably a better gun salesman than O'Bungler.

Now if only Paul Ryan weren't so anti gun.
Posted by Billll at 5:06 PM