A few days ago I had my last remaining app requiring Windows XP die aparetnly an irrevocable death. That being the case, I no longer had a reason to keep my old XP box on the desk. Except for a bunch of personal files and pictures and whatnot that I've been meaning to find and move over to the Win7 machine. Looking for an easy solution, I removed the hard drive from the XP box and installed it in the new one. As it happened, the connections were new enough that it looked like a plug and play operation with the big obstacle being the mechanical installation. 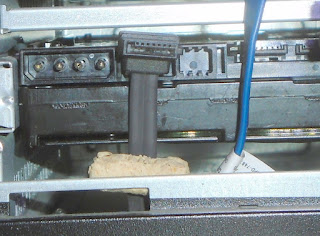 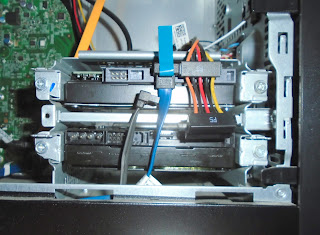 The Power cable neatly fits the larger receptacle. What could go wrong?

Got that done, plugged it all in with only having to replace one cable for a longer one, and pushed the GO button. The power supply breaker popped as soon as my finger lifted from the button. Unplug the drive and the machine starts right up. I didn't see anything wrong with the way I'd plugged everything in so I query my friends who are more computer oriented than I am. Got lots of advice, including an offer from Jed of the loan of a device that allows one to connect pretty much any hard drive to any computer regardless of connection requirements.

He came over with the esoteric tool to connect stray drives to working computers, I showed him what I'd done, he thought it looked OK, I hooked it back up and turned it on and Voila! it works. Nothing changed except Jeds presence.

So Jed is now a certified faith healer. I think it has something to do with the length of ones beard. The price of gold has historically followed the average length of men's beards, and whenever the media want an economist to pontificate on something they find some fellow with a beard. Economists without beards are simply non credible. As the beard gets longer, the area of expertise gets more esoteric and the job titles tend toward spiritual healer, high holy man, and wizard.

Keep in mind, before you toss your razor, that these are tricky lines of work and difficult to get in to like the NBA. There are a few successful religious leaders, mostly with titles like Ayatollah or Mufti, and a lot of less successful philosophers, many of whom adorn the busiest street corners with cardboard signs. Some of them are probably failed economists as well. I will note here that the current Pope is clean shaven. I will also note that, in my humble opinion, he isn't one of the better popes to come down the line, and he certainly knows nothing about economics. Next time, maybe one with a beard?